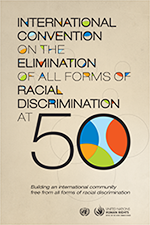 The Committee is holding its 91st session at the Palais Wilson from November 21 to December 9, 2016.  The Committee is a body of 18 independent experts tasked to monitor the implementation of this Convention by its State Parties.  During this session, the Committee will be considering the reports of the following States: Argentina*, Italy*, Portugal*, Togo*, Turkmenistan, and Uruguay*.

* These reviews are attended by IIMA representatives.

The International Convention on the Elimination of all Forms of Racial Discrimination (CERD) was adopted on December 21, 1965 and entered into force on January 4, 1969.  As of October 2016, there are 177 State Parties to the Convention. Additional information on CERD can be found here.