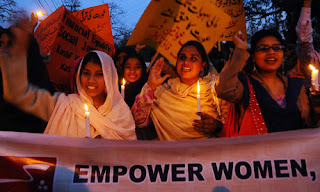 “There can be
no equal societies, development and peace if women and girls remain
discriminated against and marginalized.”  – This was a statement made by Ms. Navi Pillay
(United Nation High Commissioner for Human Rights) in her opening remarks for
the Annual Full Day Discussion on Women’s
Rights on the 5th of June at the United Nations in Geneva. In the
days preceding, the Human Rights Council also discussed the Report of the Special Rapporteur on violence
against women as well the Report of
the working group on the issue of discrimination against women in law and in
practice.
Sexual violence against women and girls is unlawful,
unacceptable and preventable. States must create a sustained model of
prevention, protection, punishment, and reparations for these acts (including
domestic violence, forced marriage and early pregnancy) by modifying
legislation, adopting action plans, and creating campaigns to raise awareness.
In fact, violence against women is not a private matter, but a deeply rooted
discrimination and patriarchal attitude. States must eliminate all kinds of
gender-based discriminations and ensure equality in fields such as education,
labor markets, justice, and health services so that all women’s rights are on
an equal basis as men. States must not
justify or condone violence and discrimination in the name of tradition
or religion and must be vigilant against stereotypes.
It was also noted that the increasing attention paid to
women’s rights in the UPR process is a positive sign  proving that there is no true democracy without
women’s full and equal participation in all political institutions.