Where is the Political Will to Stop the Wars in Syria and Iraq?

“Show me who makes a profit from war and I’ll show you how to stop the war.”
Henry Ford 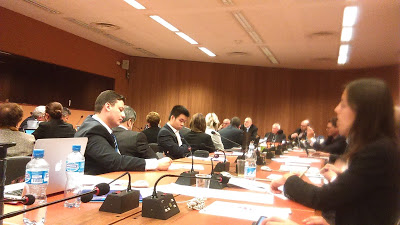 On Thursday, September 17, the office attended in conjunction with the 30th session of the Human Rights Council the side-event “Where is the Political Will to Stop the Wars in Syria and Iraq?” organized by the Permanent Observer Mission of the Holy See along with Caritas International, Dominicans for Justice and Peace, World Evangelical Alliance and Associazione Comunita Papa Giovanni XXIII.
The war in Syria is about to come to its fifth year and an end to this conflict is nowhere to be seen. What started as a civil war has become a proxy war between Russia and the US. The governments have planned for war instead of planning for peace and diplomacy had not known a bigger defeat.
Arms and volunteers, tempted by the jihad death ideology, keep arriving from the West to fight in this holy war; bombing continues and the International Community hasn’t found a way to curve the supply of weapons. While waiting for a military solution that never came the International Community has lost many opportunities to reach a successful and peaceful solution.
The corruption of authorities and the illegality in arm trading are not a side effect, they are at the core of this war. Arm sellers work without impunity in a trade of weapons which now accounts 40% of all world trade. USA buys and sells as many weapons as the rest of the world combined.
Countries like Turkey, Jordan and Lebanon cannot cope with the amount of refugees crossing their borders; if a solution is not found soon we will be facing a crisis of 8 million refugees by next year. Governments and NGOs cannot afford this war anymore, humanitarian aids are on the edge of bankruptcy and there has been a 1.6 million cut on the World Food Program.
It has become obvious that the solution must be found on the ground where car bombs are whipping the childhood of those who are supposed to be the future of the country. We urgently need to talk about values and not just about numbers of victims. We need to give cultural refugees their human right to education not only for them to have the hope of a better future, but for them to reconstruct their country.
We need for religious textbooks to favor openness; Muslims should view other religions with respect and avoid this hatred view of diversity. In order to avoid distinctions and discrimination, religion should not be mentioned in identity papers; there is a deeply need for regions without religions.
The session ended with the following recommendation from the experts:
1.      Held a New International Conference for Peace where civil society can actively participate;
2.      Create a humanitarian channel under International Law to allow civils to run away from danger and safely come to Europe;
3.      Build up humanitarian peace zones where arms cannot enter, such as the community of San Jose de Apartado in Colombia;
4.      Establish a Special and Independent International Court for the Middle East.