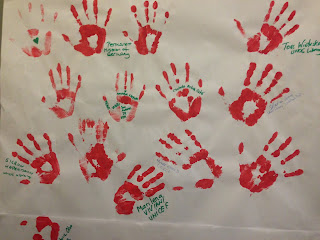 The 12th of
February 2016, on the occasion of the International Day Against the Use of
Child Soldiers, or “Red Hand Day” in support of the victims, IIMA assisted a
talk at the UN Library on how to prevent the recruitment of child soldiers
through the use of comic books.
There has been
a huge development in International Law to protect children from recruitment in
armed conflicts including: the Additional Protocol to the CRC entered into
force 14 years ago; the 2030 Agenda for Sustainable Development which targets specific
measures to eliminate the worst forms of child labor, including child soldiers;
the UNSC Resolution 16/12; and the Paris Guiding Principles of 2007.
However,
according to Mr. Ulrich Seidenberger, the German Permanent Representative to
the UN, there are still 250.000 children who were forcefully recruited to be
soldiers, guards, concubines, and suicide bombers even today. He pointed out
that in order to prevent these practices, it is very important to raise
awareness among children and communities.
Nikhil Seth,
UNSG Assistant and UNITAR Executive Director, commented that the use of comics
in Colombia and the Democratic Republic of the Congo (DCR) as an educational
tool to prevent recruitment is a very innovative approach to raise awareness
about these practices, developed by UNITAR and the Romeo Dallaire Child Soldiers
Initiative.
Svenja
Vollmer, a UNITAR fellow, explained that the comics are based on real stories of
former child soldiers. The comics look at the villages, map and identify places
and times of the day that are most risky, eg. looking for wood alone at a
certain time. The characters are represented with the typical characteristics
of the population. The comics were distributed at the Don Bosco Centre
(Salesians) in Colombia.
Why are
children recruited as soldiers? According to Michel Chikwawine, a former child
soldier from DRC, recruitment happens because they are easy to control and in
many occasions they are forced to take drugs to make them more violent. As a
former child soldier, he is now writing a mainly graphic novel to inspire young
people, especially 10 to 14 year old children who would rather see images than
read a book.
Child
recruitment remains a tough battle today that requires a combination of
governmental law policies and an increase of awareness.