UN Library Event “What’s trust got to do with Migration?” – A Human Library 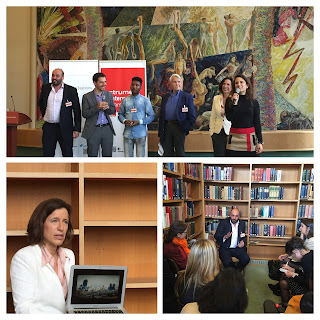 On May 11th
IIMA attended the event entitled “What’s trust got to do with Migration?” at
the UN Library, in which the guests shared their personal stories, each
focusing on issues related to migration and the importance of trust-building.
The
initiative was opened by Cornelio Sommaruga, Honorary President of Initiative
of Change International (IofC) who stated the importance of consolidating and
revaluating human security relating to integration in the global phenomenon of
migration.
This
initiative was animated by the participation of Leonard Doyle, Spokesperson for
the International Organization for Migration (IOM); Melissa Fleming, Chief Spokesperson
for the United Nations High Commissioner for Refugees; Jens Wihelmsen Member of
IofC Norway; Imad Karam, Executive Director of IofC International; Huruy
Gulbet, Eritrean Refugee, student in Geneva.
This “trust
building activity” was captivating and interactive: the distinguished guests were
arranged into separate groups in five corners of the
room, and told to share a chapter of their personal “Human Book” in
ten minutes to the audience. Each
participant listened to two different stories and was able to ask questions.
Melissa Flemming, as Head of
Communication in UNHCR which operates in 120 countries providing shelter and
help for over 30 million people who have fled wars and persecution, has known
the stories of many refugees; she told us that the best way to increase empathy
and support for refugees and the forcibly displaced is to tell their personal stories.
For this reason, she has described
in her last book “A hope more powerful than the sea” the life of a Syrian refugee, Doha who passed through Egypt, Greece and
across Europe to arrive in Finland, staying four days at sea and saving the
lives of two children.
The author also stressed the
importance of helping the refugees in their home countries.
Another “Human Book” was Imad Karam
who was engaged in different capacities in the work of Initiative of Change.
Dr. Karam grew up in Gaza City,
Palestine and moved to the UK in 2002 where he completed a PhD degree on the
impact of the media on Arab youth identity.
In his personal experience there
aren’t recipes for integration, but it is a process to build upon, and it is
important to create spaces where different people can come together in peace.
The event ended with a mutual exchange of opinions
with the audience and Stefani Buri concluded thanking everyone for their active
participation.