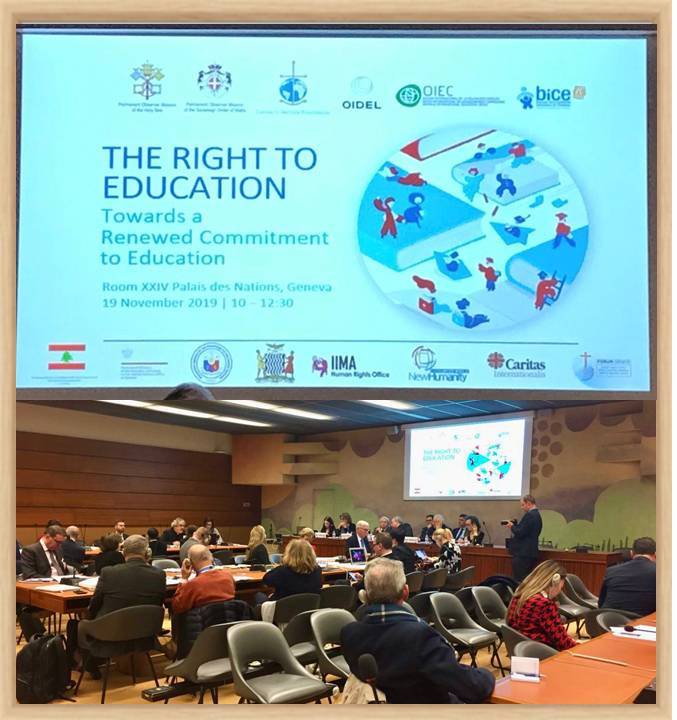 The 19th  November 2019, among the numerous events that marked the 30th  anniversary ceremony of the Convention on the Rights of the Child, the Permanent Observer Mission of the Holy See organized the side event “The Right to Education – Towards a Renewed Commitment to Education” which was held in Room XXIV of the Palais des Nations in Geneva.

The event was co-sponsored by the Permanent Missions of the Philippines, Zambia, Poland, Lebanon and the Sovereign Order of Malta as well as by the associations: Caritas in Veritate Foundation, OIDEL, OIEC, BICE, Caritas Internationalis, Istituto Internazionale Maria Ausiliatrice (IIMA), New Humanity and Forum Catholique Genève.

H.E. Archbishop Ivan Jurkovič, the moderator of the event, recalled the role of education in renewing the centrality of the human person.

In his opening speech, H.E. Cardinal Giuseppe Versaldi, prefect of the Congregation for Catholic Education of the Holy See, stressed that the path towards a humanizing education passes through a global educational pact “that everyone will undertake to implement in their own area and spread as much as possible to generate a change of mentality through education.”  The right to education, therefore, can be seen as the cornerstone for the protection of other human rights.

Mr. Benyam Dawit MEZMUR, a member of the United Nations Committee on the Rights of the Child, acknowledged the great steps taken in these thirty years of the CRC, which made it possible to reach many children even in the most remote regions. At this time, it is necessary to create a culture of children’s rights through quality education and the creation of participatory spaces for children: it is necessary to “taking action, instead of just talking action.”

Ms. Chantal PAISANT, a UNESCO representative and a member of the Catholic Child Bureau, emphasized the importance of education for people with disabilities and the culture of respect. In order to promote inclusive societies, education should help, on the one hand, to conceive human society as pluralistic and, on the other, to relate to “the other, the different.”

Mr. Jan DE GROOF, professor at the College of Europe (Bruges, Belgium) and at the National Research University – Higher School of Economics (Moscow, Russia), UNESCO Chair for the right to education and former UNESCO official, put in light the difficulties of achieving the right to a liberal and pluralistic education by affirming that governments, with the aim of shaping a vibrant democracy, must guarantee educational pluralism and promote access to private and public schools because the future of each child goes through education.

Ms. Inès de FRANCLIEU, founder of Com’je t’aime, focused on the sexual and emotional education of children and the importance of the latter for the stability of the person and consequently of the community.

The speakers’ interventions were interspersed with videos presenting four case studies on the educational interventions of OIEC in the Philippines, of the “Fratelli Project” in Lebanon, of the Proveda Foundation in Guatemala and of the Don Bosco Missions in Sierra Leone during the Ebola crisis.