The CRC on the Holy See 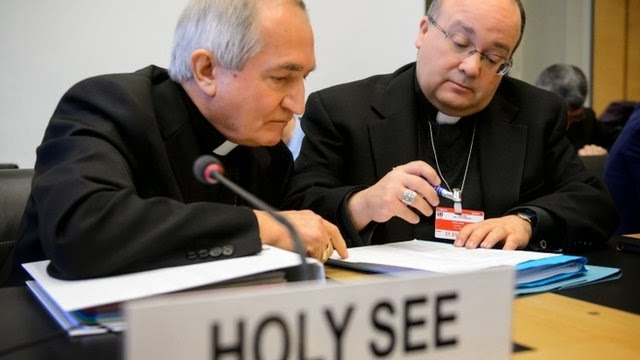 On the 16th of
January 2014, IIMA attended a meeting between the Committee on the Rights of
the Child and a delegation from the Holy See to discuss the implementation of
their human rights obligations in accordance with the Convention on the Rights
of the Child and its Optional Protocols. This was only the second such meeting
since the Holy See ratified the Convention in 1990. It is significant that the
Convention on the Rights of the Child is one of only three international
instruments which the Holy See has ratified. The meeting, unusually, took place
in the presence of a large amount of media representatives along with victims
of sexual abuse. Such meetings are a regular feature of being a State Party to
the convention and are not arranged in response to any one particular issue.
However, the controversy surrounding the abuse scandals within the Catholic
Church ensured that this would be the predominant subject of discussion.
H.E Archbishop Silvano M.
Tomasi Apolstolic Nuncio, the head of the Permanent Mission from the Holy See,
led the delegation. Bishop Scicluna, the first Bishop to publicly denounce
child abuse taking place within the Church, was also present. This was a clear
indication of the severity with which the Holy See treated this consultation.
The meeting dealt with
six broad categories: transparency, Canon law, education, abuse, sale of
children and child involvement in policy formation.
In response to probing
from the committee concerning the abuse scandal, the delegation emphasised that
their jurisdiction does not override that of States, insisting that it is
rather a spiritual jurisdiction and does not substitute the legitimate role of
domestic law. Significantly, as of the 3rd of May 2011, local
Churches or religious communities must follow domestic law concerning mandatory
disclosure. It was also explained that in Canon law a triple distinction is
made when passing judgement. This includes a judgement of not proven guilty
when it is judged that, despite lack of evidence, it is not in the best
interest of the public to fully acquit the accused. As the Holy See caters for
communities those judged “not proven guilty” are not placed in positions where
they have access to the broader public. In addition, in 2010 Pope Benedict XVI
revisited legal changes made by Pope John-Paul II in 2001 in order that
procedures following child abuse complaints be made more expedite. In 2010 a
system was also introduced whereby, on a case by case basis, canon law can be
waived to pursue investigations regardless of technicalities. However, the
delegation emphasised that there was no presumption of guilt and that the right
to a defence still stands in Canon law.
Despite this, the experts
of the Committee were firm in their insistence that better infrastructure, more
transparent proceedings and better published statistics are required regarding
abuse, not least because transparency of proceedings allowed for much more
comprehensive involvement and just compensation for victims.
The Holy See will also
meet with CAT, the
Committee against Torture and Other Cruel Inhuman or Degrading Treatment or
Punishment, later this year.