The 24th Session of the Human Rights Council reaches its end with still-standing issues and new challenges. 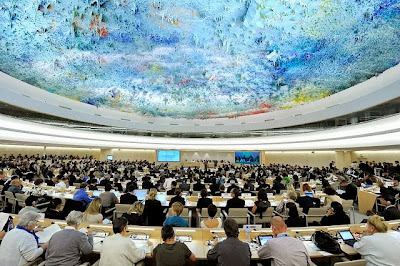 The 24th Session of the Human Rights
Council, which started 9th September in Geneva, reached its end. For
the Council, whose mission is to promote the respect of the human
rights and to monitor the violations in all the UN Member States, it’s time to review
and evaluate the results that were reached in this session.
In
this session, Syria sadly played the
protagonist, with millions of civilians forced into mass displacement by gross
violations of humanitarian law, at a time where international balances are at a
critical moment. This session hosted a general debate on Israel and the
Occupied Territories, reminding us that in the West Bank, Palestinians are
still inhumanly treated. Other ever-hot topics were also addressed, including
the rights of children in armed conflict, the rights of children of parents
sentenced to the death penalty or executed, the treatment of indigenous people,
the condition of women and gender discrimination, and contemporary forms of
slavery. Interactive dialogues with the Special Rapporteur on human rights in
Cambodia and with the Independent Expert on the human rights situation in
Somalia and Sudan took also place.
Cambodia is hanging in balance between its first steps
towards democracy and continuous limitations to fundamental freedoms by the Phnom Penh
Government. Somalia made important strides to move forward from a situation of
hopelessness toward a semblance of normalcy, fully committed to implementing
the recently adopted post-transition road map, even though the road to
establishing Human Rights in the State is still long. While the never ending
humanitarian emergency in Sudan and the human rights violations in Darfur speak
for themselves.
When the session of the Council ended on 27th
September, Room XX at Palais des Nations was overcrowded. Ambassadors and  delegations from Missions of the States,
members and non-members, as well as NGOs representatives were all present.
After HRC President Henczel declared the session open, they continued the
implementation of Item 3, 5 and 9, defining the proposals and the
co-sponsorships and voting for the adoption or rejection of the resolutions or
related amendments. Then they ended the session by considering Item 1 and going
through the closing procedures of the Council.
The Human Rights Council Session represents an
occasion for analysing and critically reflecting upon the Universal Declaration
of Human Rights of 1948, which states, “The recognition of the inherent dignity
and of the equal and inalienable rights of all members of the human family is
the foundation of freedom, justice and peace in the world.” The Declaration
describes disregard and contempt for human rights as “barbarous acts which have
outraged the conscience of mankind.” The document is still bitterly necessary,
since too many times it’s not observed.
The
Governments and civil society as a whole emerged from the 24th session
with a concrete commitment to promote democracy and the rule of law, by
carrying it out through efficiently acting together. In Room XX they confront
opinions, they take part in dialogues, sometimes they create tension, they make
decisions and they defend and secure their own positions. But it’s also a
meeting place. That’s the “miracle” by the Council. It’s like a huge geographic
map spread under the aegis of the United Nations: men and women representing
their own State, with its political lines, historical leanings, and value
systems. They represent alliances and enmities of the World. However, gathered
in the Council, they have the chance to declare themselves as individuals
committed to proving that dialogue is possible.
In Room XX, voices otherwise unheard resounded once
again. They are the voices from freethinking individuals who refuse to stay
silent. Unfortunately, the path to entrench human rights in our global society
is still long. Discrimination, intolerance, injustice, oppression, and slavery
continue to persecute people around the world and they are forced to suffer
many different abuses.
“Where, after all, do universal human rights begin?”
Eleanor Roosevelt once asked. Maybe we never thought to give a definition,
since we take them for granted. They belong to us solely because we are human
beings, and they should be valid absolutely and for everyone, everywhere.
Sadly, this goal has yet to be realized.
The words of UN Secretary General Ban Ki-Moon
addressing the Council in March 2007 are still powerful: “All victims of human
rights abuses should be able to look to the Human Rights Council as a forum and
a springboard for action.” Maybe in March 2014, when the next session of the
Human Rights Council is to take place in Geneva, new stories about further
steps towards the recognition of human rights will be heard, as evidence for
them should not be just for a History class or some ink on a piece of paper,
but a responsibility that all the people share, looking for equality, justice,
and dignity without discrimination.