SYRIA AS A PRIORITY FOR UN HUMAN RIGHTS COMMISSIONER. 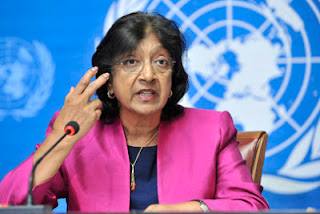 On the
27th of May the UN High Commissioner for Human Rights, Ms Navy
Pillay, opened the 23rd session of the Human Rights Council
expressing her deep concern for the brutal human rights violations presently
occurring in Syria, and she strongly urged the International Community to act to
put an end to the violence and come to an immediate and lasting solution to the
conflict.  She defined the Syrian
situation as “an intolerable affront to the
human conscience”.  While strongly condemning the violations of
human rights and of the international humanitarian law perpetrated by regime’s
forces as well as by the rebels, the High Commissioner affirmed that the International
Community cannot and must not continue to ignore the plea of the Syrian
people. “I fear that we in the
international community are failing to meet our fundamental obligations to the
victims”. Ms Pillay urged the States to work to put an end to this
humanitarian disaster, even if, she affirmed “it sometimes seems that we can do little more than cry out in the
darkness and try to count the dead”.
The High Commissioner addressed several
important questions related to the protection of human rights and focused on
the present economic crisis involving many States once economically strong and
privileged, “that have championed the
cause of human rights around the world”, as the European States. This
crisis, she stated, “threatens a broad
range of human rights across the globe as: access to decent and regular work;
to healthcare and to affordable food, housing and water. Since 2008, 114
million more people have been pushed below the poverty line, and 64 million
jobs have been lost.” Inequalities have increased, “undermining the fabric of society”, and the
devastating effects of the crisis did not hit those responsible for it, but the
most vulnerable groups of the global population: the poor; temporary workers
and all those who live paycheck-to-paycheck; persons with disabilities; older
persons; the sick; migrants; and refugees.
Ms Pillay denunciated that in Europe, as a
consequence of the crisis, there has been an increase of extremist and xenophobic
discourses, which aims to identify scapegoats for economic crisis. Although
those societies retain stable democratic institutions, they are now stepping
back into the ugly injustice of racism and discrimination, demonizing
minorities and migrants. It is shocking, she said, to observe leading figures
in governments and opposition parties integrating elements of this discourse
into their policies.
Here you can find the link to the integral
version of the Statement:  http://www.ohchr.org/EN/NewsEvents/Pages/DisplayNews.aspx?NewsID=13358&LangID=E