Side Event on “The Right to education: key to the MDGs” 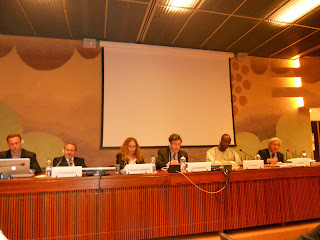 On 6 July 2011 the Permanent Mission of Uruguay to the United Nations in Geneva and the NGO Platform on the Right to Education, of which IIMA and VIDES International are members, organized a parallel event on “The Right to education: key to the MDGs, at Palais des Nations, in Geneva. The meeting organized in collaboration with the Permanent Missions of Portugal and Morocco, was moderated by H.E. Mr. Gert Rosenthal, Ambassador of Guatemala to the United Nations in New York.
H.E. Ms. Laura Dupuy Lasserre, President of the Human Rights Council and Ambassador of Uruguay, presented the Uruguayan experience in guaranteeing the right to education in the country. She affirmed that the education is a driver to the right to development worldwide, because it is a key instrument that impacts on poverty, equity, environment, etc. According to her, the access to education creates new opportunities for children who can benefit from all other rights as work, life, health, food, housing, liberty, security of the person, etc. A quality education has a positive impact not only on children but also on their families and in general, on their communities.

Afterwards, the President focused her attention on the Uruguayan experience, saying that, many children under five years old living in rural areas suffer due to territorial disparities and difficulties to access educational facilities. Regarding the second Millennium Development Goal, she presented the National Plan adopted by the government to improve education. In particular she brought to the participants’ attention different programs such as the economic support for children belonging to disadvantaged families along all the compulsory school and the introduction of full time in most of the public schools. Furthermore, she presented the “One laptop for child” program that foresees the distribution of laptops and free access to Internet in schools and other public places to every teacher and school age child. This program had a very positive impact both on children and their families, stimulating children to learn and develop their creativity, and their parents to enter in the world of technology. More than 380 000 laptops were distributed to the population by the Uruguayan government in the last few years. Today, children in Uruguay can download new programs, search information, use images, photos, do their homework and write using their laptop. Concluding her speech she said that this unique program was very expensive but the government was able to realize it because it considered the costs as investments for the future generations. For this reason she said that if everybody recognizes the importance of education, they have committed themselves to investing in education in order to achieve the second Millennium Development Goal (MDG).
Mr. Kinshore Singh, UN Special Rapporteur on the Right to Education, affirmed that around 1 million of children are actually affected by extreme poverty and suffer for its consequences. He underlined that it is necessary to fully understand the link among all human rights, the right to education and the global economic and social politics, which impact on the individual development. Furthermore, he remembered that United Nations, States and civil society have to collaborate in order to guarantee the right to education, especially in terms of individual empowerment and quality life promotion. He highlighted that all national policies should be based on two basic principles: universal access and quality education. The improvement of the MDG2 and MDG3 will be a driver for the implementation of all other MDGs.
The third panellist, H.E. Mr. Kalidou Diallo, Minister of early childhood, elementary and secondary Education in Senegal, shared the efforts carried out by his government in implementing the right to education. He affirmed that the importance of the education is recognized by the Senegal politicians who adopted several programs to improve the attendance rate and the gender equality. He shared actual data with participants saying that today 96 per cent of children access public schools and girls are more than boys. In this percentage are not included children attending religious and other private schools, who are out of the national educational system. He presented, as well, some problems of the actual educational system, such as the high abandon (8 per cent) and repetition rates (60 per cent), and the law number of student enrolled in secondary and higher education (respectively 46 and 27 per cent). He declared that children in secondary and higher education who not attend school probably live and/or work on the street, being often involved in illegal activities.
He concluded saying that the Senegal government has to commit itself in providing inclusive education, especially in primary education, in order to not discriminate children with disabilities and to offer more opportunities to all children to attend second and higher levels of education.
In the first part of his statement, Mr. Alfred Fernandez, on behalf of the NGO Platform on the Right to Education, presented the main goals of the Platform saying that it works to promote a universal quality education, support the mandate of the Special Rapporteur, and lobbying the Human Rights Council on educational issues. Furthermore, he remembered some important issues linked to the right to education. First, the necessity to ensure a universal free education, without any discrimination. Second, guarantee a quality of education that responds to the needs and priorities of learners, their families, and communities. Thirdly, the necessity for States, United Nations and civil society to collaborate in order to achieve the MDG2 and 3 concerning the right to education.
After the panellists the floor was given to the co-sponsored governments: Portugal and Morocco. Portugal, after a brief presentation of the national programs aimed at improving the right to education at national level, highlighted some important issues such as education for children involved in armed conflict and girls victims of violence. Whereas, Morocco remembered the necessity to link education to the labour market in order to offer to children more opportunities for their future. He suggested also focusing interventions on adequate curricula, training of teachers, public and private investments, technologies and international cooperation.
Other participants took the floor to express their satisfaction for the side event and the precious contributions provided by the distinguished panellists. Many of them stressed the link between the right to education and the right to development recognizing the necessity of the full commitment from all concerned actors.