Seeing the World through the Eyes of the Youth

As a former intern of the IIMA Human Rights Office and being 25 years of age, we asked Mr. Escudero to share the story of his personal empowerment and how this led to the launch of Asociación de Tierra de Jóvenes.

IIMA: In few words, how would you describe the work of Tierra de Jóvenes? 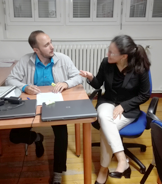 Simon-Pierre Escudero: The clear goal of our association is not just the protection, but also the promotion of the rights of children working and living on the street. We promote their rights to influence governments and the United Nations. We speak of these children so they may exist and we try to change society through the mechanism of the United Nations. I can work as an educator, but I would only change the reality of one child. Why are these children here? There are very global phenomena behind that question and these phenomena can be changed here in the United Nations.

IIMA: How did you have the idea to start Tierra de Jóvenes and why is it bear that name?

SPE: First, the idea of the street child caught my attention. Probably because my father had been a street child in France…Second, I am French, but I have a Spanish surname. It is assumed that my grandfather or great-grandfather came to France during the civil war in Spain. You could say that I am a “mix between a family destroyed by migration and a super-cohesive family from the country.” My mom is a country woman and my dad is a city man and street child. That gave me good roots and, at the same time, made me ask “why are there so many problems in the world?” My last name (Escudero) brought me to visit Spain, and after Spain I came to Latin America, a place that fascinated me.

After finishing school, I became a volunteer. I did not want to go to the university just to go to the university. So I found a volunteer opportunity that was compensated and promoted by the State, which was an incredible experience. For six months I worked in an association for the prevention of crime in marginal neighborhoods… involving all the problems of migration, violence, children in conflict with the law. Later, I travelled to Central America for four months and there I was met with the reality of street children, as well as indigenous populations. It was a fascinating experience because… in the indigenous people I was found my mother’s background—the roots, values, family—and on the other hand in the street children I found the freedom of my father.

When I came back from this experience, the organization where I had volunteered wanted to hire me as an educator. However, I discovered that this job wasn’t for me because, as an educator, everything was done in urgency; one does not have time to think about a single child and his trajectory, or how you can impact and modify his path to empowerment through human rights. Then, I began my studies in sociology at the university, focusing specifically on the issue of street children. As I needed to do field work for my studies, I travelled 4 or 5 times to Central America, specifically El Salvador. I was surprised that the NGOs that I met on my first visit in 2009 no longer were working in the street in 2012. They still claimed to serve street children, but none of them were actually on the street. Then, I decided to go by myself to the streets and I came in contact with these children. When I returned [to El Salvador] a second time, I found many of the children again, but many others had died. One young man that was very close to me (he has since passed away… he was my age, he was a young adult) told me, “I want to stop drinking. Uh, I don’t know if you can help me.” I really couldn’t, because I did not have a center where I could treat him, nor did I know of one that existed. However, I started to look for one and I found one. Then and there I started [to work] with Salvadorans and this motivated me to create [this] association.

And why did I pick the name Tierra de Jóvenes? It was a name that I had chosen for a blog on my first trip to Central America in 2009. The idea behind the name is to visit the world through the eyes of young people. When I founded the association, I chose to use that name again.

“The idea behind the name [Tierra de Jóvenes] is to visit
the world through the eyes of young people.”
– Simon-Pierre Escudero

IIMA: You mention IIMA Human Rights Office in your speech at the UN Panel. What was your relationship with this Office?

SPE: During my studies in sociology, I realized that I liked doing field world. During this time I was involved with the Salesians—I was vice president of the Salesian Youth Movement, I am a former Salesian student…Initially, I wanted to have my first volunteer experience with VIDES, but it was not possible because I had a very specific project in mind. However, I had heard of the human rights office with Sr. MaríaGrazia. The United Nations seemed to be something very distant, but I decided to ask Sr. MariaGrazia for an internship. It was a wonderful experience and it allowed me to understand what could be achieved at the UN. It is during this internship that idea of an association based on the language of human rights took form.

IIMA: Thank you for your time, Mr. Escudero. We wish you the best of luck with your work.