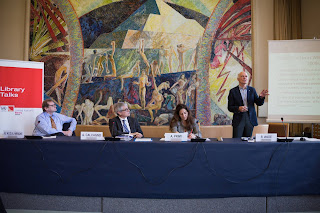 On May 24th IIMA attended a conference
at the Un Library called «  Rethinking Development strategies after the
financial crisis », an event organized in collaboration with the United
Nations Conference on Trade and Development.
The event, has been an opportunity to
launch two books published by Unctad, called ‘Making the case for Policy Space’
and ‘Country Studies and International Comparisons’, which represent a sort of recipe
to rethink the development strategies after the economic and financial crisis.
During the conference two important
facts came out :  the need to find a new type of economic policies
that are different in respect of the situation of each country and the need not
to leave an economy to the market forces but to create new macroeconomic and
sectoral policies that aim to solve the specif problem.
Finally the experience of Asia and of
other developng countries teach us that,
it would be better that the international organizations like World Bank
or International Monetary Fund, create a development-friendly governance,
according to the specific needs of the country and not on the base of the interest
of rich western countries.