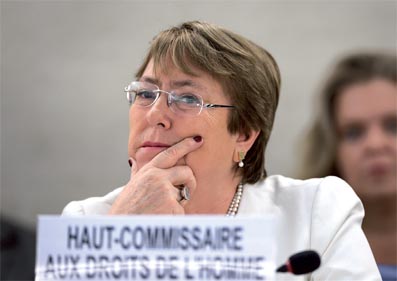 On Friday 14th September 2018 the new High Commissioner for Human Rights Michelle Bachelet gathered NGO representatives to thank them and to engage in a constructive dialogue.

In her introduction, she underlined the pivotal role played by civil society in ensuring participation at the UN level. Non-governmental organisations are in fact human rights partners. They are an essential presence in the Council; the broadest existing arena committed to fighting inequalities, climate change and human rights challenges.

Bachelet recognised that human rights defenders are facing tough times in many countries, where they are intimidated and prosecuted. To her, it is essential to strengthen NGOs position within society and foster their cooperation with stakeholders and governments. In such a challenging time, the principle of public participation in society must be used to bring the Universal Declaration to life; otherwise it would just be a document of good but useless intentions.

During the dialogue, some NGOs had the possibility to intervene and ask questions. She reiterated her commitment in making the OHCHR accessible to the greatest possible number of people, this is why she will try to make relevant documents and information available in all official languages to guarantee accessibility and transparency.

She claimed that her main task is allowing the voiceless have a voice, but she also emphasized how this can only be completely fulfilled once victims of violations see their rights restored. It is through her solution-oriented approach that she intends to face issues such as human rights in digital space and indigenous rights.

She addressed LGBT and women rights matters recalling the steps taken by Chile under her government. She ensured she will be at the forefront fighting for them. She showed concern for rising fundamentalism in Eastern Europe and expressed her willingness to cooperate closely with local associations, Parliaments and religious leaders to fight it.

Country-situations were brought to the attention of the High Commissioner, such as Palestine, Myanmar, Bangladesh and Iran. She announced her country visits list will be published soon, depending on her schedule and state’s willingness to host her. The human rights situations in Occidental Sahara, Syria, Democratic Republic of Congo and Mexico are also priorities for the Office of High Commissioner. However, Michelle Bachelet stressed the necessity of working with UN offices in New York and other UN bodies when applicable to the situation at hand.

After answering questions, she was honest in admitting that situations are urgent, but strong limitations exist. Although her position is privileged, it is weakened if states decide not to cooperate. In spite of this, she showed optimism for the future. Namely, she mentioned steps taken towards the Global Compact on Migration, and the 2030 Sustainable Development Agenda.

To conclude, she defined herself as a youthful person and wished all participants the same energy and passion to face environmental and human rights challenges.