January 27th, 2012 – International Day of Commemoration in Memory of the Victims of the Holocaust 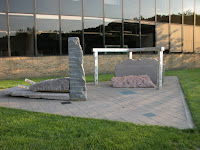 The Office of the Secretary General of the United Nations released a short statement on January 27th, 2012, to mark the International Day of Commemoration in Memory of the Victims of the Holocaust, this year dedicated especially to the children.
The requiem reminded that, though they were the overwhelming majority, not only Jewish children but also disabled, Romany and Sinthi children and all other children of any race or group deemed “inferior” were exterminated at the hands of their Nazi persecutors.  The statement went on to highlight the various forms of suffering and inhumanity undergone by the child victims, including being torn apart from families, starvation and sickness.
Tying it into the present, ongoing work of the United Nations, the elegy proclaimed that is due to the memory of those children who perished that the UN strives to protect and promote children’s rights… “everyday and everywhere.”  The poem concluded with a poignant and cautionary reminder: “Children are uniquely vulnerable to the worst of humankind.”  Therefore, it is our duty “to show them the best this world has to offer.”