« Intern with a mission – The Youth 2030 Agenda: Empowering Youth and the Sustainable Development Goals » 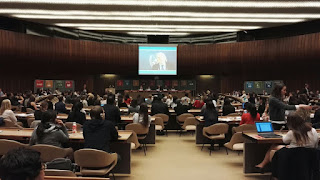 On
April 18th IIMA attended the event « Intern with a mission – The
Youth 2030 Agenda: Empowering Youth and the Sustainable Development
Goals » in Palais des Nations, organized by UNOG with the support of the Permanent
Missions of Switzerland and Belgium.

This
year the event was an initiative to promote dialogue between UN officials,
diplomats and UN interns about the topic of Youth empowerment through the
Sustainable Development Goals: the scope was to underline the contribution that
young people can give in shaping the world’s future.
The
event was twofold: the first part, consisting of four panellists, considered what
SDGs can do for young people and what youth can do for the implementations of
SDGs.
The
second part of the event asked panellists and the audience to consider the following
motion: « The current SDG framework provides enough opportunities for
youth involvement and empowerment ». In this case, two panellists opposed
the motion and the other two defended it.
Finally,
after an interactive discussion and the considerations of the panellists, the
audience voted for the motion.
The
conference opened with the remarks of Mr. Michael Moller, Director-General of
ONUG; the moderator, Ms.Charlotte L.Warakaulle, Director of International
Relations at CERN proceeded to introduce the different panellists, two against
the motion and the others defending it.
The
first “pro-motion” panellist was Ms. Arancha Gonzàlez, executive Director of
ITC, who stressed the importance of SGDs for youth empowerment but, at the same
time, affirmed the need to translate this opportunity the SGDs give to young
people into governmental policies.
The
second “pro-motion”pannelist was Ms Lyne Calder, Swiss Federal
Department of Foreign Affairs, who affirmed how the seventeen Goals are so
fundamental for young people but more cooperation between society, government
and national and international institutions is necessary to put into practice
what the SDGs provide for the participation of youth.
The
first panellist that opposed the motion was Mr. Paul Ladd, Director of UNRISD, who
admitted the importance of SDGs but, according to him, they don’t permit the
participation of young people in an equal way; for example young people that
live in a country ruled by a dictatorship don’t have the same opportunity to
apply the SDGs like their peers in a democratic country.
He
concluded by saying that we have to create platforms and policies that involve
all young people of every country to enforce the SDGs.
The
second panellist that opposed the motion was Ms. Malika Dreyfuss, Training
Programme Coordinator at Euforia that pointed out the need to create more
institutional and social relations as well as training courses to bring
together young people in order to implementent the SDGs.
The
event, after an active discussion, ended with the audience vote regarding the
motion: sixty-two voted for the motion and the majority, one-hundred and two,
voted against the motion.