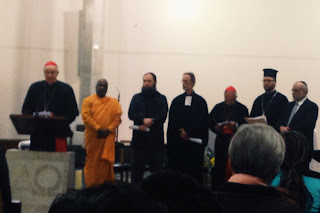 The Permanent Mission of the Holy See invited the international community of Geneva to attend an Interfaith Service for Peace regarding Pope Francis’ World Day of Peace message where he urged people to “Overcome Indifference and Attain Peace.”
The celebration was introduced by H.E. Archbishop Silvano M. Tomasi, Apostolic Nuncio, and Permanent Observer of the Holy See to the United Nations. Summarizing Pope Francis, the Catholic Archbishop Silvano Tomasi mentioned that if we are to attain peace in our world, then it is necessary “that we move beyond the many attitudes of cynicism and indifference that prohibit us from being in solidarity with our fellow human beings, especially with the most vulnerable.”
Dr.Tawalama Dhammika of the  Geneva International Buddhist Center praised the theme of indifference put forth by His Holiness, Pope Francis, and emphasized a cultural focus on egoism, avarice, national pride and cultural boundaries, rather than creating “a peaceful brotherhood among [our] fellow humans.”
Referencing the Old Testament, Great Rabbi Izhak  Dayan of the Jewish Community in Geneva said that instead of forcing strangers and refugees to become like us, we must accept them as they are, “expecting only from him respect towards the civic and social rules of our living together.”
Imam Fabrice Tonnerieux of the Cultural Islamic Foundation of Geneva focused on Pope Francis’ message that the greatest indifference we see is towards the Creator and furthermore towards the planet.
Protopresbytre Father Alexandre Sadwoski of the Orthodox Community of Geneva mentioned the call to evangelize and continue to spread the message of Peace to the entire world. Pastor Patrick Baud of the Protestant Church of Geneva condemned the reprehensible acts of violence that have been done “in the name of a god, of a faith, of a religion,” and admonished his fellow brothers and sisters to stand up for what is right and to love our neighbors, especially the refugees escaping violence.
Finally, Bishop Charles Morerord of Geneva and Fribourg emphasized the importance of keeping our hearts open to others rather than turning a blind eye to the plight of a distant neighbor, imploring others to be merciful and forgiving as Pope Francis stated.
The interfaith service emphasized the powerful message of Pope Francis regarding the state of our world. Although the focus of the service was “indifference,” the people gathered were by no means indifferent; it was wonderful to see various people of different faiths gather to discuss a shared desire to attain World Peace! Witnessing a gathering like this was a glimmering hope that peace is possible.