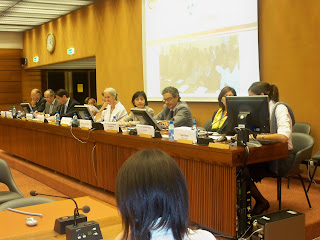 On 16th September 2011, VIDES International in collaboration with the Istituto Internazionale Maria Ausiliatrice (IIMA) organized a side event at Palais de Nations, Geneva. The event was co-sponsored by the Permanent Missions of Costa Rica, Italy, Paraguay, Uruguay, the Permanent Observer Holy See and the NGOs Platform on the Right to Education.
The event, entitled “Young Volunteers and Human Rights” served as a response to the UN Secretary General Ban Ki Moon’s request to “the international community to support youth as agents of change and development.” The panelist present at the event focused on voluntary activities carried out by youth of different organizations in their respective countries and on governmental contributions.