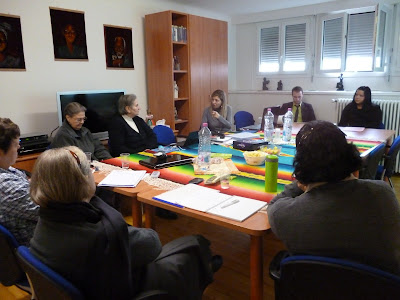 The 10th training course organized by IIMA, in collaboration with VIDES International, was recently conducted for several of those responsible for IIMA in Europe. The training was divided in two sessions, the first of which was held in Geneva from February  24th to March 2nd, and the second from March 9th to 15th at the IIMA Human Rights Office. The course was intended to offer training on UN mechanisms for the protection and promotion of human rights and the role of IIMA and VIDES as NGOs contributing within this system. The training course followed a theoretical and practical approach that combined presentations at the IIMA office with attending meetings of the Human Rights Council at Palais des Nations and of the Human Rights Committee at Palais Wilson (Geneva).

To open the training course, Ms. Maria Francisca Ize-Charrin, former Director of the Field Operations and Technical Cooperation Division with the Office of the High Commissioner on Human Rights (OHCHR) presented a historical overview of  human rights, explaining progress made so far in protecting those rights and, therefore, human dignity.
In parallel with the theoretical training, participants attended several meetings during the 22nd session of the Human Rights Council (HRC), including the opening speech of the High Commissioner for Human Rights, Navi Pillay, who emphasized the importance of civil society, as the true hero of our times; and a panel on “The Power of the Empowered Women”, which featured women who had dedicated themselves to challenging gender discrimination and violence against women.

Moreover, participants had the opportunity to have private meetings with several State delegations.  One of these was H.E. Mgr. Silvano Tomasi, Apostolic Nuncio and Permanent Representative of the Holy See at the UN in Geneva. His speech underlined the importance of education and the fundamental role of human rights as a new universal language. Another important speaker was Mr. Alfred Fernandez, main representative of OIDEL, who discussed how the right to education is enshrined in some of the core UN treaties.

Fr. Olivier Poquillon, Main representative of Dominicans for Justice and Peace (Order of Preachers), spoke to participants about the freedom of religion and belief. Finally, participants of both training sessions met with Ms. Elena Ippoliti of OHCHR, who gave a presentation on Human Rights Education. She underlined how important is today to educate people and increase their awareness of human rights.

On Saturday afternoon, the participants of the first group had the opportunity to visit Geneva, the old city and the lake with the “jet d’eau” while the second group had the opportunity to visit Annecy and follow the footsteps of St. Francis de Sales. The participants and the organizers of the training sessions expressed great satisfaction with the fruitful discussions and dialogue that took place throughout the training course, and participants left with greater commitment to and awareness of human rights and its connection of human dignity.