How to Use the System to Get Your Voice Heard 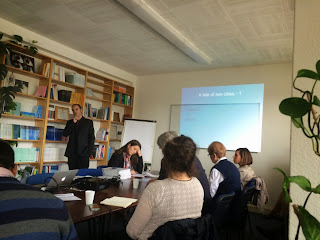 On Monday, May 4, IIMA and VIDES attended a training organized by the International Catholic Center of Geneva (CCIG) aimed at helping NGOs and other stakeholders optimize their efforts to make their voice heard during the Universal Periodic Reviews (UPR). Since NGOs are not given the opportunity to speak during the UPR session, the best chance to voice concerns over the present Human Rights situation is the option to lobby States to bring up the concerns on the NGO’s behalf.
Jean-Claude Vignoli, the Programs Director at UPR-info, held the training. He explained the UPR process, exactly what an NGO can and cannot do, and where to find pertinent information to ensure a better success rate of having the issues addressed during the UPR. The biggest impact can be made at the lobbying stage that occurs before the UPR session, as well as the period between the UPR and the adoption of the Working Group Report at the following Human Rights Council.

The first option involves seeking States that already support the NGO’s cause and encouraging them to recommend an improvement to the State during the Review regarding those causes. The second option entails meeting with the States under review after the UPR session to encourage them to adopt the recommendations that relate to key human rights issues reported by NGOs. If NGOs are able to band together under certain issues and carry out joint lobbying actions, the chances of that recommendation getting adopted are even higher.

Mr. Vignoli also highlighted the need to approach lobbying from multiple fronts – not only with the Permanent Missions in Geneva but also with Embassies in the State under Review, and with the Capitals of potential supporting States. Good working relationships and effective communication are the keys to getting your voice heard in order to bring the attention of the international community to key human rights violations occurring on the ground.
For further information, please refer to the related article on the CCIG website.