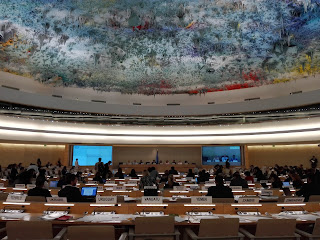 On the 14th of September 2016, the United
Nations in Geneva held a High-Level Panel on the Fifth Anniversary of the
Adoption of the United Nations Declaration on Human Rights Education and
Training during the 33rd session of the Human Rights Council.

H.E. Mr.Choi Kyong-lim, President
of the Human Rights Council, declared the start of the High-Level Panel. The panel
was introduced by Ms. Kate Gilmore, United Nations Deputy High Commissioner for
Human Rights, followed by a keynote address by Mr. Jordan Naidoo, Director of
the Division for Education 2030 Support and Coordination, United Nations
Educational, Scientific and Cultural Organization (UNESCO); and later a panel
discussion was moderated by Ms. Cristiana Carletti, Associate Professor of
International Law at the University of Roma Tre in Italy.

In her introduction, Ms. Gilmore reminded States that they possess an
obligation under international law to provide Human Rights Education (HRE) and
training. Recognizing that there are more individuals under the age of 25 than
there have ever been in history, Ms. Gilmore stressed that education is the
most powerful weapon to be used to bring about positive change in the world.
Mr. Jordan Naidoo began his keynote statement by signaling the prevailing
global mood of disenchantment in regard to the protection of human rights. Therefore,
he highlighted not only the need to provide HRE for people of all ages, but he
stressed its capacity to empower individuals to make concrete changes in their
own lives and in the lives of those around them.
Following these comments, Ms. Cristiana Carletti chose to set the stage
of the upcoming panel discussion by introducing a five minute clip from the
documentary “A Path to Dignity: The Power of Human Rights Education.” The video
told the success stories of children and adults in Southern India, who were
discriminated against based on their sex or caste, but were able to recognize
their innate value as human beings as a result of HRE. Not only were they eager
to claim their rights, but they were also determined to protect those of others.
The first panelist, H.E. Ms. Sonia Marta Mora Escalante, Minister of
Education of Costa Rica, shared the decision of her country to incorporate the
2030 Agenda into its national curriculum, focusing efforts on, for example,
ending sex- and gender-based discrimination, as well as teaching global
citizenship. Next, H.E. Ms. Flavia Piovesan, Secretary for Human Rights at the
Ministry of Justice of Brazil, spoke on her country’s National Guidelines for
HRE based on the principles of human dignity, equality, recognition and
appreciation of diversity, secularity of the State, democracy and education, and
social and environmental sustainability. Ms. Piovesan further described a prize
awarded by her Government to individuals and institutions that have stood out
in the protection of Human Rights. The next panelist was Mr. Driss El Yazami,
Chair of the National Human Rights Council of Morocco, who shared the guidebook
his country had developed in conjunction with UNESCO for the HRE of youth.
Additionally, Morocco’s National Human Rights Council conducted a survey to
assess the status of human rights in the country, which would be very helpful
to identify what priorities must be addressed at the Government level. The
final panelist, Mr. Herman Deparice-Okomba, Executive Director of the Centre
for the Prevention of Radicalization Leading to Violence in Montréal, Canada;
identified violent outbreaks of radicalized individuals to be a phenomenon resulting
from a lack of HRE. Mr. Herman called for a preventative approach to
radicalization by working to address the root causes of this kind of violence.
During the discussion among States, many highlighted the special link
between HRE and achieving the SDGs. States also encouraged their peers to make
use of the well-designed World Programme for Human Rights Education. Slovenia
highlighted the fact that refugee and migrant children should not be left out
from HRE. Ecuador and the Republic of Congo shared that HRE was part of the
training that their public servants already received. NGOs called for
collaboration between national human rights institutions and Governments, as
well as for States to allocate more money to education rather than to military budgets.
The International Organization for the Right to Education and Freedom of
Education (OIDEL) stated that providing HRE is compulsory based on
international law and, therefore, reports to UN human rights treaty bodies must
seek to measure States’ efforts to make this education available to all.
The
final comments of the panelists included highlighting the need for countries to
mainstream HRE in the process of achieving of each of the SDGs and as a
stand-alone goal, allocating more funding for HRE, increasing efforts to
provide all members of society with this formation, and making use of the
Internet as a means to promote HRE. Ms. Carletti had the final word. After
commenting on the audience’s shared understanding of the catalytic role of
education, she thanked the Office of the High Commissioner, the members
of panel for their contributions, and all Member States for their comments.