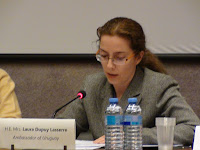 On 20 June 2011, H.E. Ms. Laura Dupuy Lasserre, Ambassador and Permanent Representative of Uruguay, was elected President of the Human Rights Council, on the occasion of the Organizational meeting that was held in Palais des Nations, Geneva.
The president of the Human Rights Council, H.E. Mr. Phuangketkeow, introduced the brief speech of the UN High Commissioner for Human Rights, Ms. Navy Pillay.
She congratulated all members of the Council, and stakeholders such as NGOs and National Human Rights Institutions, for the commitments and efforts made during the last Human Rights Council. She declared to be very proud of her staff, especially because of the many obstacles they have had to surmount after the absorption of many activities without receiving an adequate human and economic support. She affirmed that in this global financial situation, all states are under pressure to contain costs and respond to population’s needs. But, at the same time, states should be aware of human rights challenges that need urgent attention. She hoped for a better future and underlined the necessity to continue to work all together, in a cooperative and peaceful dialogue, in order to achieve the universal protection and promotion of all human rights.
In a second moment, Mr. Phuangketkeow announced that H.E. Ms. Laura Depuy Lasserre, was elected new President of the Human Rights Council. Ms. Dupuy Lasarre took the floor thanking everybody for their confidence, and in particular to all Latin American countries, who where their biggest supporters. She declared that this role is an honour for her and her country, Uruguay, where after years of dictatorship, it is possible to see all fundamental human rights and freedom respected. She shared with the room her personal experience telling that that she knows very well what means living under a dictatorship, because her father and other members of her family were tortured. After that tragic experience her family was totally involved in the implementation of democracy and social justice in the country, also to honour all those were victims of the previous regime. The new President underlined the necessity to work together with all members of the international community in order to resolve all critical situations and impede all human rights violations.
After the introduction of Ms. Laura Dupuy Lasserre many countries underlined their satisfaction for the new elected President especially because she is the first woman to hold this role.
Finally, the new President expressed her intention to focus her efforts to implement the fundamental human rights worldwide and in particular to guarantee the access to education and health, as basic human rights, and to fight against discriminations and violence, serious problems that affected all countries around the world.