From Lampedusa to Geneva: the second UPR of Italy 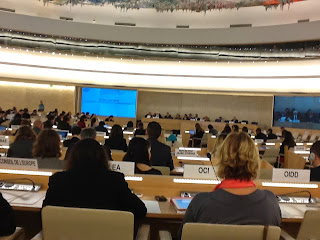 Monday,
October 27 in room XX at the United Nations in Geneva the second
cycle of the Universal Periodic Review of Italy took place.
Lapo Pistelli, Deputy Minister of Foreign Affairs
and International Co-operation stated that the
new government was accelerating the implementation of international
recommendations, for example in the matters of cyber crime, of migrant workers
rights and of their families, of torture and also about the creation of a
National Human Rights Institution in accordance with Paris Principles. During
the interactive dialogue, many States congratulated the Italian Government for
the efforts done on carrying out the recommendations of the first cycle and for
the significant progress. Pistelli underlined that of 78 recommendations proposed 74 have
been accepted. The crucial theme treated were: immigration, remembrance of the thousands of victims saved from the
sea, the people arrested for national and international crimes and the
trafficking of human beings with the operation “Mare Nostrum”; the fight against trafficking of human rights and violence, with special attention to domestic and homely violence, discrimination and xenofobia (included LGBT), integration
of vulnerable groups (migrants, women, disables) through adequate education
and assistance. IIMA and VIDES, along with other NGOs presented a joint report
regarding these same topics as well as youth employment. They also did an
activity of lobbying with many States to include these questions in the
interactive dialogue. Concerning the
problematic question on immigration, Pistelli stated: “people that know Lampedusa understand this island is not
the door to Europe, but a rock in the sea, where actually thousand migrants are
passing. The migratory flow is not a Italian problem, but a
global challenge”. He urged European and not States, to find
common responses.
In conclusion,
the spokesmen of Italy reminded that they were aware that there is still much
to be done, but that they were progressing step by step to protect the human
rights in Italy.