“Education for Peace!” Celebrating the International Day of Peace 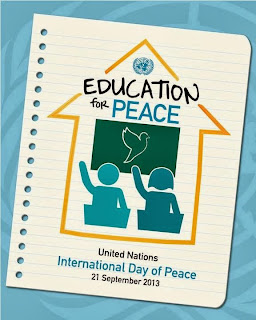 One day, every year entirely
dedicated to Peace. It’s a way to discover the true meaning of that word,
making peace real and not just a spot of ink on a piece of paper or just the
visionary dream of a poet.
The UN has invented one day like
that. One day when everybody lets a glimmer of peace into their busy daily
life, from those in poverty living in a corner of the world, or into a
devastating war, or children in fear, or into the heart of a young man anxious
about his future.

On the 21st of September
the world is commemorating the International Day of Peace, established by
resolution 36/67 of the United Nations General Assembly, a day dedicated to
strengthening the ideals of peace, both within and among all nations and
peoples.
It’s an invitation to peace on
Earth, a tradition that started 31 years ago; it’s a way to speak out and raise
the voice, loudly pronouncing the condemn to war, since hate is generating
hate.
In 2001, the General Assembly launched
also 21st September as an annual day of non-violence and cease-fire, as an
attempt to take the tough road to dialogue.
The theme for this year is
“Education for peace.” It’s a beloved topic for the whole Salesian family and
for IIMA in particular, since the association puts effort into defending the
education rights for all the children and the youngsters.
Not just education to peace, but also education for peace: it’s important to guarantee
the right to education, to know new things, to be informed, to learn, because
everybody no matters his or her age can be aware of his or her role within the
civil society. This is certain to be an important piece in building a better
world. Therefore, peace can be seen as an instrument to educate for life as
well.
“On this International Day of
Peace, let us pledge to teach our children the value of tolerance and mutual
respect.  Let us invest in the schools
and teachers that will build a fair and inclusive world that embraces
diversity. Let us fight for peace and defend it with all our might”, UN
Secretary-General Ban Ki-moon said in his message for the 21st
September, highlighting the role education can play in fostering global
citizenship.
It’s an awareness-raising initiative
about peace and tolerance, since peace creates the premises in promoting human
development, giving young people the opportunity to build their future,
inspiring for an authentic stability and cutting the plagues of our time—poverty,
hunger, child mortality, wars, and illness—drastically.
Peace makes the world colourful,
where everybody has the right to be treated as a human being: everybody
receives respect through true peace. Men are respected for the colour of their
skin, for the language they speak, for their eyes shape, for the food they
usually eat, for the way they dress, for what they think and write, for their
cultural traditions, for the God they pray to.
We hope education can drive the
change, leading to diversity being embraced, because we know we don’t live in a
fairy tale, but we can commit together, to make the story of our humanity a
good one to tell.