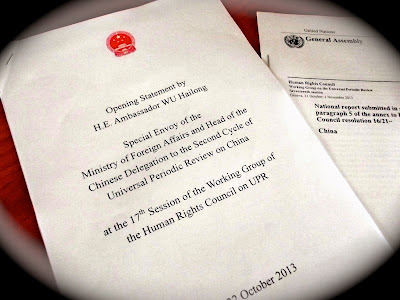 On 22nd of October 2013, room XX
of the United Nations office was filled with tension and excitement. Almost
every State was ready to speak and contribute their opinion on the status of
Human Rights in China over the four years since China’s first Universal Periodic
Review (UPR). For China’s second UPR, Mr. Wu Hailong of the Ministry of Foreign
Affairs gave an opening statement, which reviewed the progress that China recently
made in human rights and quality of life. China is made of over 1.3 billion
people and 56 ethnic groups, but the report was simple, to the point, and only
lasted 25 minutes out of the allotted 70. China painted a picture of a country made
of complete equality, freedom, and progress during the report.

Next,
States made comments and recommendations for the Chinese Delegation. Mr.
Hailong’s summary of the comments accurately portrayed the events by saying
that most developing States praised China’s advancements in human rights and
quality of life, while more developed States criticized the lack of religious
liberty, ethnic persecutions, and absence of political freedoms. China claimed
that there is absolute religious and political freedom, but that unregistered
churches and work contrary to the government’s interest remain illegal and are
prosecuted. A similar response was given for Sweden’s, the United Kingdom’s,
and the United States’ recommendations that human rights defenders should not
be persecuted or tortured, by China responding that those individuals are
criminals and are hiding behind the guise of human rights. Recommendations from
States covered a multitude of subjects including internet freedom, social
welfare, improvements to education, rights of attorneys, abolition of the death
penalty, gender discrimination, and closing reeducation through labor camps. In
call that came out above all others, over 27 States recommended that China
ratify the International Covenant on Civil and Political Rights that it signed
in 1998.
The
world waits with bated breath to see how China will respond to the
recommendations and how human rights will progress in the State. There is hope
that China will listen to all recommendations and continue to improve the life
of its citizens.