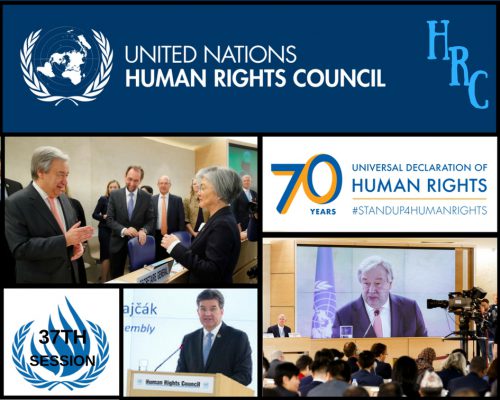 37th session of the Human Rights Council: Challenges and Opportunities

On 26 February 2018 at Palais des Nations in Geneva, in Room XX, the 37th session of the Human Rights Council (HRC) commenced with the high-level segment with the speeches from the Secretary General of the United Nations António Guterres, the President of the General Assembly of the United Nations Miroslav Lajčák, the High Commissioner of Human Rights Zeid Ra’ad Al Hussein, the Federal Head of Foreign Affairs of the Swiss Confederation followed by interventions of dignitaries from over one hundred States.

UN High Commissioner for Human Rights, Mr. Zeid Ra’ad Al Hussein, remarked that these three pillars are not stand-alone concepts, but must be understood as interconnected and interdependent parts of a unique structure, the triple helix, which, together, are greater than their component parts.

As we celebrate the 70th year anniversary of the UDHR, the Council recognizes, lauds, and honours human rights defenders for their tireless and inspiring work.

The Secretary General of the United Nations, António Guterres, recognized that the UDHR is not yet effective as people still face violation of their human rights.

The Secretary-General added, in a following intervention, that the Universal Periodic Review (UPR) is an essential tool to scrutinize and hold every Member State accountable, which provides a guideline for implementation and measurable achievements because “human rights are not a luxury”. We must support civil societies because as he said, “The individuals and organisations are our eyes and ears and conscience”.

President of the UN General Assembly, H.E. Mr. Miroslav Lajčák, confirmed, “All of these actions start with a decision made in a room like this one. But they have a tangible impact, on the ground”.  Real change occurs when States adhere to recommendations and continue peacebuilding by implementing these recommendations to ensure the promotion of human rights. As Alexander Van Der Belen, President of Austria stressed that “without national action, norms enshrined by the Council would not be effective.”

In the annual high-level panel regarding human rights mainstreaming, the consensus was the same. Despite the human rights issues faced within each country, most Member States are committed to the same ideals: to ensure fundamental human rights, secure a sustainable future for all, and make real the policies adopted. During this panel discussion, NGOs were given the opportunity to participate, notably, IIMA and VIDES International joined International Catholic Centre of Geneva (CCIG) to give an oral statement that reinforces the urgency for State cooperation with civil society and respect for humanitarian law. The HRC needs to continue to create a constructive atmosphere and cooperative spirit, like this, to maintain a safe space for civil society and human rights institutions to dialogue.

At the end of the day, Member States, NGOs, and other speakers emphasized the importance to keep the UPR universal, independent, and an impartial mechanism. More importantly, it is not the quantity of the recommendations, but quality of it to be short, concise, and action oriented. Funding is still an issue and technical support is necessary to improve human rights conditions.

What started 70th years ago with the UDHR was a dream and novelty. Now, the legacy of Eleanor Roosevelt and her colleagues of promoting universal human rights for all is a secure base for its realization.