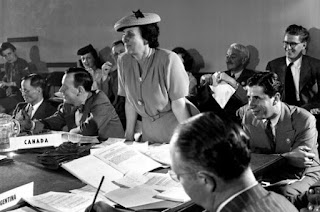 On February 8th IIMA attended the seminar “Women
& the UN Charter; How gender equality got into the Charter and why it
matters today” at the UN Library. The seminar was introduced by Dan Plesch,
(Director, Centre for International Studies and Diplomacy, SOAS University of
London) who stated that without gender equality in the main articles of the UN
Charter the advancement of women these last seventy years would have been far
more difficult.
This event was special because it was the first
time Master students were included among the panelists and the first seminar on
the topic of the involvement of women at the UN. The first speech, delivered by
Elise Dietrichson, emphasized the importance of women in the Charter,
specifically naming notable female figures that have contributed to this
historical event. She said that although Eleanor Roosevelt played an important
role, it is crucial to understand the importance of non-western women in the process.
Furthermore, Elise mentioned that, within our own societies, we must continue
to actively promote not only women but everyone’s rights.
Carlos Eduardo da Cunha Oliveira (Permanent
Mission of Brazil) focused his speech on Dr. Berta Lutz, a Brazilian scientist,
politician and diplomat, who actively fought for the rights of women. He
emphasized that the action of fighting for her beliefs was very impactful,
taking into consideration that in 1997 gender perspectives were still yet to be
acknowledged. Nevertheless she did it because for her it was the right thing to
do.
Fatima Sator and Hibatallah Al Saud, Master
Students in International Studies and Diplomacy, emphasized the importance of
recognizing the participation of non-western women because the UN has been
always perceived as a western creation. Within this context it is critical to
remember this part of history in order to encourage other women to do
incredible things in their own societies. To know what all these women have
done can help us to better understand gender equality and recognize that there
was not only one but plenty of women who contributed to this historical moment.
The panelists also mentioned that non-western men
also played a crucial role. Their achievements wouldn’t have been possible if
women and men hadn’t worked together. Finally Hibatallah Al Saud expressed that
if we don’t honor these women, we are basically telling young girls that what
they do doesn’t have any importance.