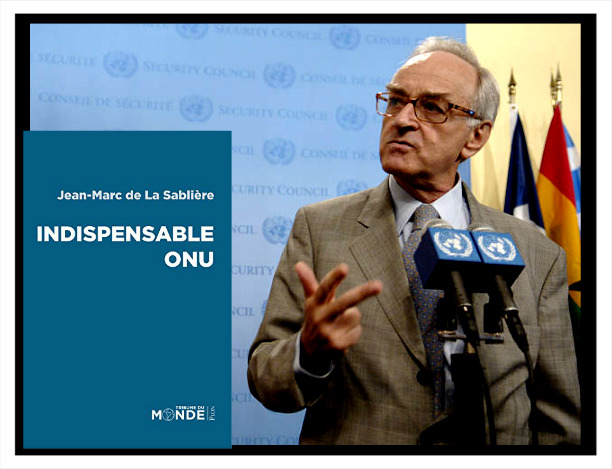 Presentation of the book, “Indispensable ONU”

On November 20, 2017, as part of the “UN Library Talks Geneva” series, there was a presentation of the book “Indispensable ONU” by its author, the former French high diplomat Mr. Jean-Marc de La Sablière. The Director-General of the United Nations Office at Geneva Mr. Michael Møller participated in the meeting, as well as the distinguished journalist Mrs. Catherine Fiankan-Bokonga. In the audience, the Ambassadors of France, Togo and Benin honoured the presentation of the book with their presence.

After a lifelong career in the French top diplomacy, Mr. de La Sablière retired in 2012. He served in several Embassies around the world, was the counsellor in the Foreign Bureau of African Affaires under the Jacques Chirac presidency and ultimately the French representative in the UN Council of Security. In his book, he reflects on the impact of the UN system on different aspects of our lives, from the day-to-day routine to the great geopolitical decisions. Mr. de La Sablière outlined some critical fields in which the UN plays an indispensable role: peace and security, human rights, humanitarian and development aid and technical cooperation between States fostered by the UN.

Thanks to his experience, Mr. de La Sablière analysed the different dysfunctions of the United Nations, in particular the bureaucracy and the lack of democracy in the decision-making process. As an example, he talked about the failure of the proposition made by India, Germany, Japan and Brazil to increase the number of permanent members of the Security Council in 2005. The absence of political willingness and commitment from the African states prevented the resolution from being adopted.

Nevertheless, Mr. de La Sablière says in its book not to dwell too much on the negative aspects of the UN because, with the right reforms, the UN can regain its role at the negotiating table and promote cooperation for global peace. The former French diplomat found some ideas of the newly designated Secretary General Antonio Guterres very interesting, in particular in the security field. According to him, the peacekeeping missions’ system should be reviewed in order to increase the efficiency and the trust of the populations.

The discussion also involved Mr. Møller, who pointed out the essential work done in the UN office in Geneva. He praised the work of Mr. de La Sablière. Some questions were formulated at the end of the meeting regarding the role of China in the Security Council, or the principal obstacles preventing the reform of the UN system. The meeting was followed by a small reception and the sale of Mr. de La Sablière’s book.