Peace is real only when shared.


If we have no peace, it is because we have forgotten that we belong to each other.- Mother Theresa 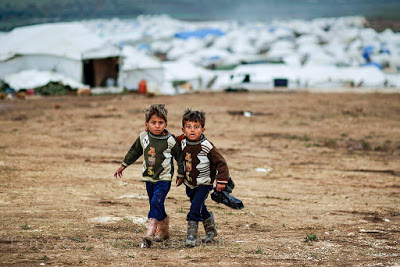 It has been four years, 4 million refugees, 7.6 million of internally displaced people, 23 million in need and 220 000 deaths since Syria’s civil war started.

Desperate to flee the violence that has overran their country and their lives, Syrians are taking dangerous routes in the search for peace in nearby countries. One of this routes is the passage to Europe through the Mediterranean Sea, in which according to a UNHCR report, at least 2 500 Syrian refugees have died only this year. The Syrian crisis has become the worst refugee crisis since WWII.


As in any war, the worst outcome is the stolen lives of those who find themselves trapped in it, and above all, the stolen childhood. Many of the children have known war all their lives and sadly they might die without knowing otherwise.

In 1989 the UN held the Convention on the Rights of the Child, in where, along with the world, vowed to do whatever it takes to protect children’s rights; to make their voices heard, to ensure them a prosperous life and education; to allow them to reach their full potential and to have a prosperous future. We promised to allow kids to be precisely that: kids.

Twenty six years later we haven’t fulfilled our promises yet. We are allowing them to live a life of fear, to grow up without understanding what security feels like, without knowing what home stands for, without knowing what peace is; we are allowing them to die with their faces buried in sand while we take the role of spectators. How many more pictures does the world needs to see to realize the need of a belated help?

This is a matter that concerns all of us, and the world cannot afford to loose these generations. The solution is not just hosting the refugees, is helping them avoid the horrible journey they must endure to flee the war and allow them to have a life in their own country. One Syrian kid pleaded when he was being interviewed by Al Jazeera, “Please help the Syrian. The Syrian need help now, just stop the war and we don’t want to go to Europe, just stop the war.”

Let us do it for the ones who are still alive.