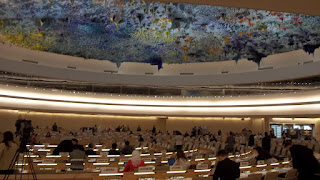 On
September 13, the Human Rights Council (HRC) opened its 33rd regular session at
the Palais des Nations in Geneva.   HRC
President CHOI Kyong-lim presided over the opening of the session which
will take place in the Human Rights and Alliance
of Civilizations Room (also known as Room XX) from September 13-30.
Room XX was
filled with Member States delegates, civil society observers, and NGO representatives
who were electrified from the outset by the opening statement of the UN High Commissioner for
Human Rights (HCHR) Zeid Ra’ad Al Hussein.
The tone of his statement was a change from the past as he used strong
words to convey his concerns at how human rights mechanisms were being
obstructed, interefered with, and politicized by the Member States in
contravention of their human rights responsibilities. Over 20 States accross
the world were singled out by the High Commissioner over various human rights
concerns.  General debate between the
Member States was reserved for the next day during which time States lobbed
accusations, defended their policies, or supported the HCHR for his remarks.
During the remainder of the week, over 10 topics were addressed to
the HRC by independent experts and special rapporterus on special issues such
as, water and sanitation, enforced disappearances, contemporary forms of
slavery, hazardous wastes, and unilateral coercive measures, to name a
few.  The High-Level Panel Discussion on
the UN Declaration on Human Rights Education and Training was of particular
signficance as it marked its 5th anniversary.
High level representatives from Morocco, Canada, Brazil, Slovakia, and
Costa Rica delivered their statements on the importance of human rights education.  In addition, the panel presented a 5-minute
screening of the HCHR documentary, A Path to Dignity : The Power of Human
Rights Education,
that captivated the essence and objective of human rights education.
The week
ended with general debate and interactive dialogue on the Right to Development
and other thematic reports of importance to the Council.  Week two of the HRC Session will be marked by
another electrifying start as the Council will hear the report on the
Commission of Inquiry on the Syrian Arab Republic.