Human Rights Council Session: a glance at the second week 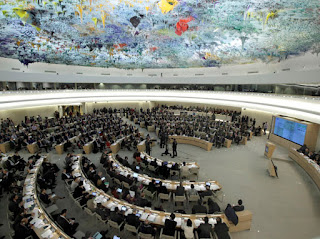 ﻿
The Human Rights Council (HRC) reconvened on Monday with the report of
the Commission
of Inquiry on the Syrian Arab Republic, which is tasked to investigate human
rights law violations during the Syrian conflict.  The report sparked
heated dialogue between the Member States in the general debate that
followed.  NGOs also presented their views and experiences of the grave
realities affecting people on the ground in Syria.
During the week, representatives from VIDES and IIMA also had the
opportunity to address themes of importance to the Council.  On Tuesday,
IIMA delivered an oral statement during the Council’s discussion on Item 5,
which included the issue of unaccompanied migrant children and adolescents and
human rights.
IIMA’s statement addressed the importance of providing education
to unaccompanied migrant children.  Then on Thursday, VIDES representative
Maria D’Onofrio spoke of the importance of empowering youth at the panel on
Youth and Human Rights.  In addition, fellow panelist and IIMA
collaborator Simon-Pierre Escudero spoke of the challenges facing street children
in El Salvador which he combats through the local organization, Asociación de
Tierra de Jóvenes.
This panel was a great step forward for bringing the
topic of youth and human rights to the UN agenda, which IIMA will continue to
promote through its work at the UN.
Other important topics that were discussed during the week included the
rights of indigenous people with a particular focus on violence against
indigenous women and girls.  The Council also heard the outcomes of
Universal Periodic Reviews (UPR) on several Member States to include Ireland,
Thailand, Tanzania, and Trinidad and Tobago.
The end of the week finished
with debates on reports from the Advisory Committee and the UPR review process.
The third, and last, week of the HRC session will see discussions on
gender equality and status of reports about the situations in the Ukraine,
Burundi, Sudan, and other States needing technical assistance and capacity
building from the UN.