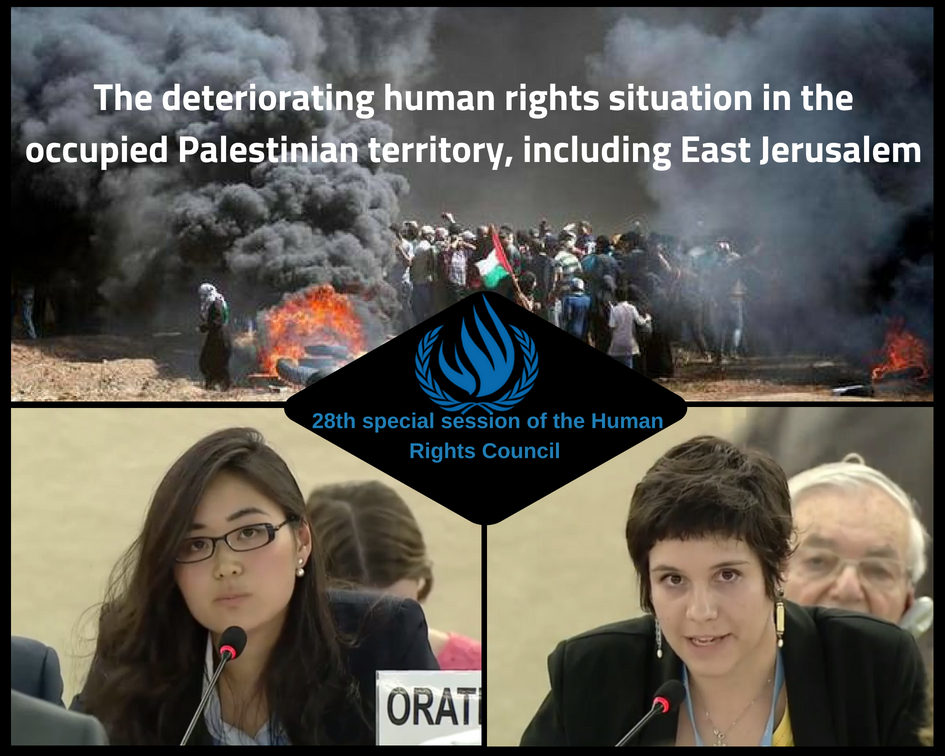 After the tragic events of 14th May 2018 in Gaza, the Human Rights Council (HRC) convened the 28th special session on the deteriorating human rights situation in the Occupied Palestinian Territory, including East Jerusalem. In accordance with resolution 5/1, the HRC  can convene special sessions, when needed, for emergency and urgent human rights violations and situations which need the attention of the HRC, at the request of a member of the Council with the support of one-third of its membership.

The resolution A/HRC/S-28/L.1 demanded that the HRC “urgently dispatch an independent, international commission of inquiry to investigate all [alleged] violations and abuses of international humanitarian law and international human rights law in the occupied Gaza Strip, in the context of the military assaults on the large-scale civilian protests that began on 30 March 2018.”

In the statement made by the High Commissioner for Human Rights Zeid Ra’ad Al Hussein, he deplored the recent killing of dozens of Palestinians and the thousands injured at the Gaza border. Even if some demonstrators had attempted to use Molotov cocktails and wire cutters to cut fences between Gaza and Israel, these did not justify Israel’s use of lethal force.  Israel, as an occupying power under international law, is obliged to protect the population of Gaza and ensure their welfare.  For this reason, those responsible for such violations of human rights, in the end, must be held accountable.

Addressing the Council in a video message, Michael Lynk, Special Rapporteur on the situation of human rights in the Palestinian territories occupied since 1967, noted that over the past seven weeks, more than 100 Palestinian demonstrators had died at the hands of the Israeli military.

Israel, speaking as a concerned country, underlined that the proposed resolution was yet another politically motivated attack on them and stressed that the people of Gaza were never considered Israel’s enemies. Israel, likewise, justified its action as an exercise of their own right to self-defense. Another major contention of the Israeli Government is that Hamas is cynically exploiting its own population in a violent campaign against them and this resolution will only empower Hamas.

The State of Palestine, on their part, stressed that the killing, the criminal acts, and the disproportionate use of Israeli forces against civilian protesters who are against the Israeli Government’s occupation policies were unacceptable. Furthermore, Palestine’s Ambassador made it clear that the Palestinians are willing to shoulder their responsibilities if found liable by the independent investigating body for the violations of human rights along the Occupied Palestinian Territory.

Before voting for the resolution, Member States, Observer States, and Non-governmental organizations expressed their own concerns on the ongoing human rights violations in Palestine. In the discussion, speakers recognized and supported the right of the Palestinians to self-determination, and regretted the recent events that undermined prospects for peace, noting that the transfer of the United States Embassy to Jerusalem had also contributed to the violence.

IIMA and VIDES took part in this discussion. The two oral statements highlighted that this year, 2018, marks the 70th anniversary of the Universal Declaration of Human Rights and that the United Nations, since its establishment, together with Civil Society actors, had always worked for peace, security, and development. However, none of these would be attainable without the respect for human dignity and the promotion of human rights for all, whatever their religion and identity. Indeed, as Pope Francis affirmed, the use of violence never leads to peace.

The resolution has been voted and adopted by the HRC with 29 Member States in favor, 2 against, and 14 others abstained.