WELCOME BACK, ISRAEL! Israel returns to the HRC, but not without reservations. 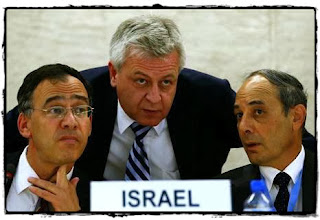 On 14th May
2012, Israel decided to suspend its relations with the Human Rights Council
(HRC), becoming one of the most controversial countries at the United Nations
in Geneva. Absent during its Universal Periodic Review (UPR) on 29th
January 2013, the meeting was postposed to 29th October 2013. Israel
has been the first country to do this. As a result, the international community
feared for the future and legitimacy of UPR process.
Following negotiations
with the President of the HRC and international pressure from Member States, two
days before the agreed date, Israel government confirmed its participation and
just a day before the meeting, the national report was submitted. This unusual
attitude was greatly criticized during the UPR session.
In front of a full room,
H.E. Mr. Eviatar Manor, Permanent Representative of Israel to the United
Nations at Geneva, started by declaring that Israel decided to suspend its
relations because of discrimination against Israel within the HRC. One example cited
was the HRC’s Agenda Item 7, which only discusses the situation of Human Rights
on Israel. According to Mr. Manor’s words, “It was not an easy decision” and
Israel could not support more unfair treatment. He recognized that Israel is
not a perfect country, as the rest of the countries, but they are trying to
improve human rights in the Middle East. H.E. Mr. Shai Nitzan, Deputy Attorney
General Ministry of Justice of Israel, highlighted the existing collaboration
between the government and NGOs in Israel to combat terrorism and the
importance of Israel’s democratic government.
From the 73 speakers who
took the floor, most of them were worried about the prolonged absence of Israel
from the HRC. The main topics during the discussion were the occupation of
Palestine, Gaza Strip’s blockade, infrastructure in the West Bank, Israel’s
settlement policy, discrimination of minorities, right to self-determination,
right to education, and juvenile justice.
The Arab countries were
the most critical of Israel’s choices and acts, not only in the United Nations,
but also in the Middle East. They strongly emphasized refugees’ rights,
prisoners’ liberation and freedom of religion. During its participation, the State
of Palestine declared: “Israel only understands the language of pressure.”
Subsequently, Syria recommended respecting the cultural differences of Syrian
people living on Golan Heights. On the other hand, United States congratulated
Israel’s rejoining the HRC, supporting its democratic tradition and values, its
free elections and its open society.
After all the
controversy generated from this debate and all adversities in arriving at the
review, the importance of the United Nations should be considered as a place where
countries can approach and resolve their problems through dialogue. But this is
not the final stage; it is just the beginning. Defense of human rights is not
utopian, and action is the best way to prove it.