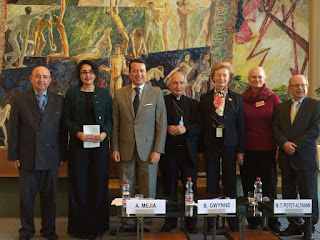 On February 5th
IIMA attended a UN Library event called “A Dialogue on Faith, Peacebuilding
& Development”, in commemoration of The World Interfaith Harmony Week.
The conference was
introduced by Francesco Pisano, the director of the UN library; he explained
the importance of remembering the United Nations General Assembly resolution
A65/5 that enacted the World Interfaith Harmony Week, when we can emphasize the
importance between all faiths and beliefs and the need to eliminate all
terrorist extremism and violence all over the world.
The event was divided
into two panels: the first panel talked about the different perspectives on
faith and peacebulding while the other concentrated on the link between faith
and development.

In the first
panel there were three panelists: the first, Ms.Saja Majali, Permanent
Representative of the Hashemite Kingdom of Jordan to UNOG, stressed the King of
Jordan’s vision regarding religion, his initiatives to create tolerance and
respect of diversity and his engagement against terrorism.
The catholic
Archbishop Silvano          Tomasi,
Apostolic Nuncio and Permanent Observer of the Holy See in Geneva, praised the
Christian perspectives in promoting peace, emphasizing values such as justice,
fraternity, and interreligious dialogue as the main condition to attain peace.
Finally Mr. Silmane
Chick, Permanent Observer of the Islamic Cooperation in Geneva, emphasized two
important topics, set out in the 7th Islamic Summit in Casablanca in
1994: First, the role of the school in educating citizens of the future in a
continual struggle against ignorance that is the basis of all acts of violence
and terrorism; and the second one, referring to the urgent humanitarian
question in which we have to concentrate on respecting values such as human
life and human dignity in order to create dialogue between all people.
The second panel presents
the relationship between faith and development, especially referring to the
2030 Sustainable Development Agenda.
The first panelist
Mr. Alex Mejia, Officer in Charge at the United Nations Institute for training
and research, suggested concentrating our attention on the implementation of
the Millennium Development Goals both nationally and internationally in order
to ameliorate the lack of economic and social development of certain countries,
which may sometimes lead to violence and terrorism.
The second panelist
Ms Beris Gwynne, former director of World Vision International, focused on the
power of school to train young people that live in a time where social media plays
a major role in influencing them and where there are a lot of  dangerous threats; in this way, it is important
to protect human life.
The last panelist,
Mrs. Marie-Therese Pictet-Althann, Permanent Observer of the Sovereign Military
Order of Malta to UNOG, showed the humanitarian and diplomatic activities and
projects that the Order of Malta carries out in the world to enhance social and
economic development and to create dialogue for peace.
The conference ended
with the closing remarks of Mr. Luis Gallegos, Chairman at the global UN
Partnership for Inclusiveness and former Permanent Representative of Ecuador to
UNOG, who underlined the importance of creating this interreligious dialogue
among different faiths and religions in order to ameliorate mutual
understanding, cooperation and form a culture of peace
that is imperative in fighting threats of terrorism against other religions.