When the parent of a child is sentenced to
death or executed, the child’s mental health is damages and their physical
heath is often put at risk. A child will often experience discrimination
especially where the parent’s sentence is publicly known. 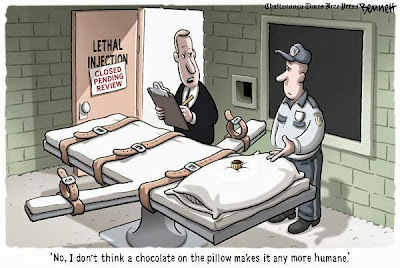 As the death penalty
disproportionately affects those who are poor or marginalized groups,
discrimination can be exacerbated. The effect on children can be drastic as the
child can be orphaned or left without the care and support of a parent.
Sometimes children may have to stop their education and begin working to
support themselves. This situation can make the children susceptible to abuse,
neglect, and exploitation.

In some nations, the inmate and inmate’s family are
not informed about the execution.
In a
panel discussion before the Human Rights Council on September 11, 2013 experts
from varying fields discussed the harmful effects of the use of the death
penalty on the children of those executed or sentenced to death. Mr. Remigiusz
Henczel, President of the Human Rights Council, moderated the panel. Before the
panel began Ms. Flavia Pansieri, Deputy High Commissioner for Human Rights,
gave an opening address providing an overview of the issue. She reminded the
panel that where the death penalty is not abolished, the State must at a
minimum follow international law, including the International Covenant on Civil
and Political Rights and the Convention on the Rights of the Child. Where the
death penalty is used, the nation must consider the consequences of its use on
society at large, including children and the family of those who are sentenced
to death.
The panel began with Mr. Jorge Cardona Llorens,
member of the Committee on the Rights of the Child, focused on the requirement
of a State to consider the “best interest of the child” in all matters that
directly or indirectly affect a child, including when a parent is sentenced to
death. Because the interest of the child must be a primary concern, he reasoned
that the imposition of the death penalty against a parent would rarely, if ever,
be imposed because it is clearly against the best interest of the child based
on its negative effects. Dr. Sandra Jones, a social worker whose research is
primarily focused on children of death row parents, took the floor next. In her
experience, the children withdraw and isolate themselves from peers and family
members and because of this they are unable to fully grieve while their parents
are awaiting death and after. Ms. Nisreen Zerikat, from Jordan’s National
Center for Human Rights, said that even a moratorium on the death penalty has a
severe impact on children because they are unsure when their parent will be
executed. She also suggests that the government and NGOs work with children’s
schools to prevent bullying by other children and by teachers. Francis Ssuubi
commented his work running a program in Uganda for children whose parents had
been executed or sentenced to death. He explained that children faced an
increased risk of being sacrificed because of accusations witchcraft and became
vulnerable to attacks and rape because no one is available to protect them.
The interactive dialogue of Member States and
NGOs mostly focused on calling for an abolition of the death penalty because it
is a violation of human rights and because of its affect on children. Italy
mentioned its concern that by killing parents through the death penalty, the
children are more likely to become criminals themselves.
Over all this panel and interactive dialogue
shined a light on a victim of the death penalty that is often forgotten and
ignored by society. These children become very vulnerable and need our support
and care. Hopefully from this dialogue, States will change the way they
approach children of parents who are subject to the death penalty and treat
them as victims.