The Rights of the Child at the United Nations 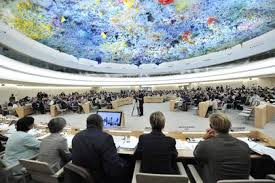 Every year during the Human Rights Council at the United
Nations in Geneva, a full day is reserved on the rights of the child. This day
presents an opportunity for representatives from countries and NGOs to meet and
compare various realities and international initiatives regarding children.

This year, on March 7th 2016, Mr. Benyam Dawit Mezmur
(Chairperson of the Committee on the Right of the Child), Ms. Maud de
Boer-Buquicchio (Special Rapporteur on the sale of children, child prostitution
and child pornography) and Mr. Hernias Allen (Chairperson of the International
Advisory Board of the United Kingdom) attended the early morning session.
Ms. Kate Gilmore (High United Nations Deputy Commissioner for
Human Rights) introduced the debate reporting the situations to which children
are exposed during online activities including the use of internet for the
diffusion of pornographic material. The internet offers a great opportunity for
people to connect socially and culturally, especially young people.
Unfortunately in many cases, it’s submitted to a serious distortion: the
younger the children are, the more vulnerable they are – both in the virtual
and real world- and more serious is the abuse to which they are submitted.
It’s necessary to act in unison in order to minimize the risks
that the internet offers while at the same time acknowledging its positive use
as a source of knowledge and global information.
In order to sift through the sea of data and material, in an
effort to provide help and a “cure” to the negative outcome of
internet, some guidelines have been set in conformity with the Optional
Protocol to the Convention on the Rights of the Child.
We must not forget, as it has been highlighted during the
meeting held on March 8th by the report of Mr Marta Santos Pais (Special
Rapporteur on violence against children), that children are subjected through
the internet, not only to violence and pornography from adults, but also to
cyber-bullying: an abuse that doesn’t conclude with the physical action of
bullying perpetrated by a person or a group of the same age, but that continues
because the debasing material is made available online for others to see,
permanently undermining the self-esteem and reputation of the child.
Many States do not yet offer specific legislation to protect
children from different manifestations of violence, but merely condemn sexual
abuse and the diffusion of online material in general. To allow effective
multilateral, regional and national action we need to share information on the
international level, relying on extraterritorial judicial collaboration that
simultaneously involves the authorities of the various countries involved in
the diffusion of online material.
At the same time we need to create a network of protection for
children beginning with  scholastic education,
that provides the tools for becoming “online citizens” responsible and
conscious of the risks and their rights.
As Ms. Marta Santos
Pais highlighted in her report about the violence that children still suffer
worldwide, the abuse is multifaceted.
The reports by the Special Rapporteurs highlighted the serious
violences that children are still submitted to in every day life: from the
inhuman and degrading treatments within the family and school spheres, child
trade and sexual exploitation, the market of child brides, up to their
involvement in armed conflicts.
During this meeting IIMA e VIDES International noted – through
an oral statement – that in some countries such as India, violence towards the
younger begins even before their birth and mostly afflicts girls as they are
subjected to selective abortion , forced sexchanges, or forced into marriages
during their adolescence.
The path to achieving a general protection of children is still
long, but it must come from the empowerment of youth and their families,
through programs of scholastic education regarding human rights and through the
protection and promotion by the States of the weaker minorities, including
youth.