The opening of the Human Rights Council in Geneva 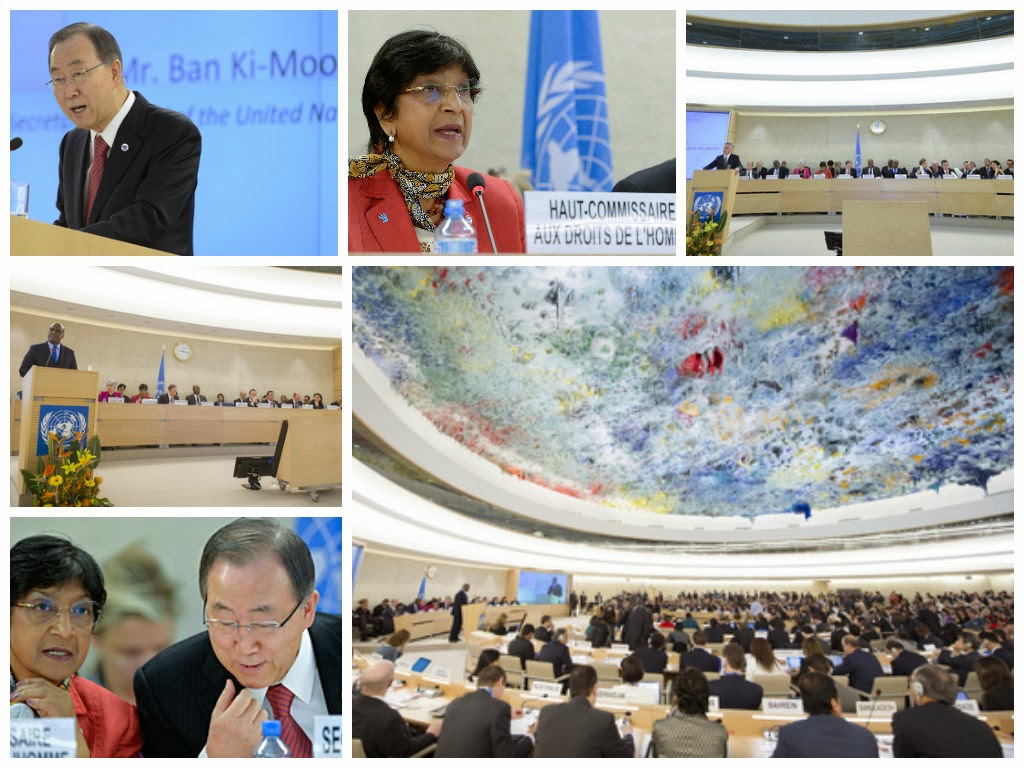 On
the 3rd of March the Human Rights Council in Geneva opened its 25th
regular Session, scheduled to end on the 28th of March. Room
XX of the Palais des Nations was crowded with ambassadors, delegations, NGOs,
Civil Society and numerous Press Officers for the opening four-day High-level
Segment during which over 90 ministers and other senior dignitaries will
address the 47-member Council on global human rights matters.
Gabonese
Baudelaire Ndong Ella, President of the HRC, was the first speaker, followed by
John W. Ashe, President of the UN General Assembly, the Secretary General Ban
Ki-Moon and the High Commissioner for Human Rights, Navi Pillay, who is almost at
the end of her mandate. Swiss Confederation
President Didier Burkhalter welcomed the delegations on behalf of the host
Country: “As the people of United Nations, it is our duty and responsibility to
be spokesmen of Human Rights”, he said.
Each speaker expressed his belief that this session of the HRC would be
particularly auspicious.
In particular, the UN Secretary General highlighted the situations in
Syria, the Central African Republic, South Sudan and the Democratic People’s
Republic of Korea, emphasizing the fundamental role played by the International
Community. “Streets, airwaves, entire countries are buzzing with demands for
economic, social and political justice,” Navi Pillay stated in her opening
address to the Council, highlighting the growing number of people confidently
laying claim to their rights.
Notably absent was Foreign Minister of France Laurent Fabius, whose
intervention was scheduled on Monday.  Moncef Marzouki, president of Tunisia, delivered a copy of the new
Tunisian Constitution, approved in last January, to Ban Ki-Moon, who had
already defined it “a possible model for other people aspiring reforms”.
Russian Federation Foreign Minister Sergej Lavrov’s intervention was heavily
anticipated; he gave the Kremlin’s perspective on the Ukrainian issue, reaffirming
the Russian troops right to intervene in Ukraine’s Crimean peninsula to protect
ethnic Russians “from attacks by ultranationalists”.
On Monday afternoon, a meeting between Lavrov and the Secretary General took
place on the margins of the opening session of the UN Human Rights Council,
while European Foreign Affairs Ministers were meeting in Brussels.
“We discussed the creation of a contact group which could support
de-escalation in Ukraine”, stated OSCE Chairperson-in-Office. Burkhalter added
that they also discussed other ideas such as the possibility to monitor the
situation in Ukraine, which could help to re-establish trust in the long term
by focusing on minorities and human rights. In
this regard, the statement from Dimitris Kourkoulas, Greek Foreign Affairs
Minister speaking on behalf of Catherine Ashton, High Representative of the
Union for Foreign Affairs and Security Policy for the European Union, was
significant: “The EU commends the measured response demonstrated so far by the
Ukrainian government to these developments and extends its full support to all
efforts towards political and social stabilisation through reforms,
inclusiveness at all levels of governance, and the respect of the rights of
persons belonging to national minorities in line with European standards”.
However,
the heated situation in Venezuelan was not addressed during the discussion. Elias
Jaua Milano, Foreign Affairs Minister for Venezuela, summarised the
violence that caused several deaths in February during the clashes between
protesters and government security forces. The Minister described Venezuelan
people as free from illiteracy and hunger, in a Country where free education is
provided and democratic elections process took place. Unfortunately, he failed
to mention the high rate of crime, the worsening economic framework and the
deterioration of independent media outlets.
Jaua
Milano criticized the groups of demonstrators who attacked Venezuela
and its vocation to peace, stating that because of the violent character of the
protests, the government was forced to react using force, to defend the Country
against this “aggression to democracy”.
Sadly,
this is a frequent excuse: violence to appease violence.
We
need to point out that even in Venezuela, as in Europe and in the Arab Spring
case, young people are, as always, in the frontline to protest and fight for
their rights.
In
this regard, welcoming the testimonies from the FMA Sisters on the field, IIMA
and VIDES International would like to use this occasion to condemn all episodes
of violence, particularly those in Venezuela and Ukraine. We would like to show
our support and affinity with the people of these Countries who deserve freedom
and guaranteed social rights.
Non-violent
protest should be an instrument for promoting and defending the fundamental
freedoms of every person on Earth.