The effect of Armed Conflicts on children 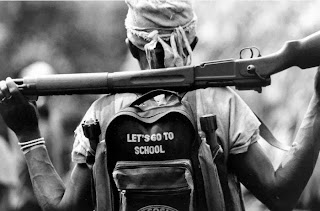 As our world is
faced with conflicts with radically different armies and battlefields, children
suffer the greatest from the effects of war. Young children are recruited as
soldiers and others are displaced from their homeland. Their neighbourhoods are
the frontlines for warfare. They are killed or maimed by explosives, land
mines, drones, and other weapons. When children are displaced from their homes
or when their homeland becomes dangerous, children are less likely to attend
school, especially girls. In other cases, schools are destroyed. Rebel groups
target schools and hospitals and children are used as human shields.

The 24th Session of the
Human Rights Council turned its attention to the issue of Children and Armed
Conflict and started a dialogue between State Members on how to create
solutions for this problem.

The Special Representative for Children and Armed
Conflict gave an oral report on progress currently being made and areas of
concern. The report highlighted the conflicts around the world that have a
great effect on children—the conflict in Syria, the military coup in Mali,
instability in the Central African Republic, and Somalia. For example, half of
the refugees leaving Syria are children. The Special Representative reported
that action plans to prevent the use of child soldiers and to limit conflicts’
effect on children are being planned or being implemented in nations where
children have been recruited to fight, including Yemen, Chad, Somalia, and the
Democratic Republic of the Congo. These action plans set out concrete goals for
the governments of these countries to stop the recruitment of children in
warfare, limit the effects of warfare on children, and work with child
protection agencies. The Special Representative announced a global initiative
to end the use of children in armed conflict by governments by 2016.

There is added complexity in the
United Nations’ goal because non-state actors such as rebel armies and
terrorist groups are increasingly using children and harming children in their
conflicts. The Special Representative engaged a number of non-state groups,
including the Free Syrian Army, the Sudan People Liberation Movement North, and
the Moro Islamic Liberation Front in the Philippines, to stop the recruitment
of children in their conflicts.
A number of States where children
were recently combatants spoke of the difficulties on reintegrating children
after the traumatic experiences of war. The delegate from Sierra Leone spoke of
over eight thousand children lacking the ability to peaceably solve problems
because of the violent past and how the children lacked the basic education to
return to school. This led to widespread unemployment of children as they
became adults. Sri Lanka and South Sudan, who both in recent years had children
fighting in conflicts, echoed the need to discover the best practices in
integrating children involved in conflicts so that the children can become a
part of a peaceable society.
The effect of armed conflict on
children is becoming increasingly important in our world. The Delegate of the
Holy See pointed out these children need not only education, food, clothing and
shelter but also mental and spiritual healing and reconciliation with their
families.