The Committee on Economic, Social and Cultural Rights opens fiftieth session with an important innovation. 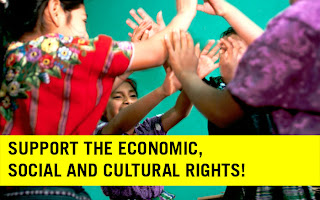 On April 29, 2013 the Committee on
Economic, Social and Cultural Rights (CESCR), opened its fiftieth session with an
important innovation: on the fifth of May of this year, the Optional Protocol to the International
Covenant on Economic, Social and Cultural Rights will enter into force, meaning
that victims of violations of rights stated in the Covenant will be allowed to
submit statements to the Committee and seek justice at the international level.
Uruguay became
the tenth country to ratify the Protocol on February 5, 2013, allowing the
Committee to start receiving statements submitted by individuals. According to
M. Ibrahim Salama, Director of the Human
Rights Treaties Division of the Office of the High Commissioner for Human
Rights, who delivered a speech during the Opening Session, this mechanism will contribute to the
development of a new jurisprudence which will clarify the scope of application
of the economic, social and cultural rights.
The Director
also reiterated that this will be a very important year for debates concerning the
development of the Post-2015 Agenda
and the review of the International Conference on Population and Development (ICPD)
Beyond 2014.
In the last
months, civil society groups also called for the future agenda on development to
be rooted in principles of human rights and to have a strong
framework for accountability.