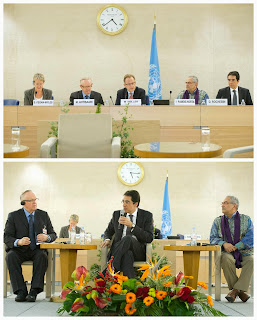 When two Nobel
Prizes winners, Martti Ahtisaari and José Ramos-Horta, tell about their
long-time experience and their passionate fight, our wish of Peace smells like
hope, because we feel it’s not just about words. Which better location than
Room XX, the room of “Human Rights and Alliance of Civilizations”, to host
a dialogue of Peace? Held in Palais des Nations on Wednesday, November 13th,
the Conference was entitled “Complexities of Peacemaking: the untold
story”. In Geneva, which has been consecrated, once again, the capital of dialogue
and mediation, the setting for negotiations and conciliation.
The two leaders
shared a very charismatic dialogue. One is a cold and calm Nordic man, who had
a written speech and a typically Finnish aplomb. The other one has the heart
from the South: passionate and lively, he talked off-the-cuff, entertaining with
jokes and irony and bringing the assembly to an unexpected laugh.
Martti Ahtisaari
was former President of Finland. The 2008 Nobel Peace Prize was awarded to him,
“for his great efforts, on several continents and over more than three decades,
to resolve international conflicts”. Ahtisaari was a major contributor when
Namibia achieved independence in 1989-90, arbitrated in Kosovo in 1999 and
2005-07, and helped to bring the long-lasting conflict in the Aceh province in
Indonesia to an end in 2005.
José Ramos-Horta,
winner of the 1996 Nobel Peace Prize and former President of Timor Leste, was
one of the leaders of the resistance when Indonesia occupied his country, as
well as Special Representative for the Secretary-General and head of the UN
Integrated Peace-building Office in Guinea-Bissau.
“Poverty
and inequality generate conflicts, but economic growth alone cannot be the
solution”, Ahtisaari said. While Michael Møller, UNOG Acting Director-General,
complimented him for being a peace builder, with his upright behaviour he
stated: “Too old to blush”. Meanwhile he invited all of us to be architects of
our future.
After telling some smart jokes, Ramos-Horta quoted his last speech as a
president of Timor Leste: “Never humiliating the adversary. Bleeding together
is needed, to raise again. Humility is the
greatest quality of a leader, because arrogance is peace’s enemy”, he said
while confiding he thinks the greatest
visionary is the one who encourages and promotes respect for diversity, which
is not weakness to a state, but a huge wealth.
Both the guests agree in stating that reconciliation is needed, through
an open dialogue between conflicting memories. The world looks at these two
Nobel Prizes as modern “heroes”, but they are just people who chose to behave
as human beings. This discussion leads us to a reflection: War comes from hate.
And it generates hate.
Scenes of
ordinary madness come up again: Syria’s hell, wakes of the Second Intifada,
Arab Spring violence, Israeli occupation of the Golan Heights, Hezbollah in
Lebanon, the terrible poverty in Chiapas (a gift from the war), FARC guerrilla,
child soldiers and the horror heritage at the borders between Sierra Leone and
Liberia, powder keg Iraq, the forgotten Congo war, the enduring conflict in
Darfur. War winds are blowing. It deals with a war that changed its aspect and connotation
during the time. It is the invisible enemy war, the chemical weapons war, and
the war of the martyr warriors and of bombs falling down as if it was raining.
Today, speaking
about peace helps us to commit to put another brick to build it and to feel
more human.