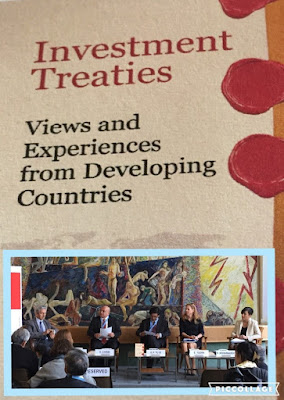 On May 18, 2016
the Book Launch “Investment Treaties” – Views and experiences from developing
Countries on the Reform of the Investment Protection Regime – took place at
the UN library in Palais des Nations

The panelists
were Prof.
Carlos Correa, Special Advisor on Trade and Intellectual Property, South
Centre, H.E. Mr Xavier Carim, Ambassador of South Africa to the World Trade
Organization, Elisabeth Tuerk, Chief, International Investment Agreement
Section, UNCTAD, and Kinda Mohamadieh, Research Associate, South Centre. The
event was introduced by  Martin Khor, Executive Director of South Centre.
The debate on
the implications of international investment treaties and the investor-state
dispute settlement system has been intensifying and widening in the past years.
The authors
have stressed that the problem of the investment protection regime is
multilayered and complex and is rooted in various deficiencies
: I. an imbalance in the
provisions of the investment treaties (definition of investment and investor,
free transfer of capital, right to establishment, protection from direct and
indirect expropriation) which focus on the investor’ rights and neglect
investor responsibilities; II. The
wording of Treaty provisions, which allow expansive interpretation by
arbitrators; III.The lack of transparency and available public information
As a result, there’s
a growing consensus that the investment protection regime needs to be reformed.
States, both
developed and developing, have been considering various reforms and potential
alternatives, including through renegotiation or termination of investments
treaties. This situation has been triggered by the states for the increasing exposure
to claims by investors, who are turning to arbitration to challenge a wide
range of government measures.
The
distinguished guests addressed the strict relationship between foreign direct
investment, investment agreement and economic development.
Elisabeth Tuerk
in particular has highlighted that the policy framework described by UNCTAD in
the World Investment Report 2015 recalls
the investment improvement through the creation of the “International
investment Courts”.
To
the question “What can be
done better?” the panelists responded
that the first step would be to invest responsibly and the second one is to
look at current treaties of India and South Africa as models.