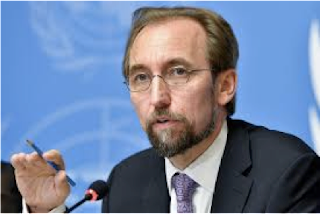 On 13th of September 2016 the Office attended the
Opening Statement of the 33rd Session of the Human Rights Council that, Zeid
Ra’ad Al Hussein, United Nations High Commissioner for Human Rights read in
front of all the Representatives of the States and civil society brought
together.

The
speech began with a serious complaint that Al Hussein wished to share after two
years as High Commissioner: the growing refusal on the part of an increasing
number of Member States to grant OHCHR, or the human rights mechanism, access
to countries when this is requested explicitly or even in other instances when
the OHCHR wishes to engage with them.
Furthermore, he reminded the Assembly of
the original decisions that led to the birth of this
organization: that the entire human rights framework had been the product of
catastrophe and was created out of the sharpest and most profound necessity. He
added that, even today, climate change and the SDG Agenda are anchored, layers
deep, in that most strongly-held belief that only by working together can we
solve our common problems. There are no alternative, no other choice offering
any hope; we must remain committed to collective action.
He stated that either way the Council has achieved
important successes in these past years but he also expressed concern about a
growing polarization within the body, as well as a worry in regards to the
increasing clear attempts by States to block or evade human rights scrutiny.
The High Commissioner reiterated that an
“intervention” is coercive by nature and it should be obvious that OHCHR has no
coercive power. Access is only possible when the State extends an invitation,
an action that is necessary in order to establish a neutral perspective about
the facts on the ground.
Otherwise, he shared that efforts to refuse legitimate
scrutiny raise the obvious question which is: what, precisely, are you hiding
from us? Furthermore, access delayed is considered access denied. It is not an
excuse to deny access, due to the fact that his staff would be entering
insecure zones. They have done this many times.
He then began to list the States that
have refused access to OHCHR, for example, Syria which has granted no access to
OHCHR or to The Commission of Inquiry since the crisis began in 2011; or
Venezuela that has refused even to issue a Visa to the Regional Representative;  he also expressed acute concern about the
rights of people living in south east Turkey after receiving reports on
violations of international law, including civilian deaths, extrajudicial
killings and massive displacements. Access has also not been granted in this
zone.
The day following the High Commissioner’s statement, during the General
Debate, Mr. Mehmet Ferdeui Carikci disagreed with the assessment of High
Commissioner on the situation in Turkey. Regarding Syria, Mr. Hussam Edin Aali
defined the HC speech as not objective in providing information reflecting
nearly a “role” played from some countries for political and financial reasons
and went beyond the mandate and also that the OHCHR should remain independent. He also spoke about propaganda programs against Syria and how
politicization was weakening the Human Right Council.
He shared publicly the request sent to India and Pakistan to invite
teams from the Office to visit both sides of the line of control, as well as a
request for access to Mozambique and Gambia, Crimea, Abkhazia, South Ossetia,
Nagorno-Karabakh, Nepal, Uzbekistan, Tbilisi in Armenia, Dominican Republic,
Seoul (Korea) and The Islamic Republic of Iran. The High Commissioner suggested
that first-hand access to China would allow a better assessment of the
situation in terms of poverty alleviation.
Turning to United
States, the HC has expressed his dismay at the failure of the Government to
accept the Special Rapporteur on Torture’s request to enter the Guantanamo Bay
Detention Center, judging the evasive tactics of the US authorities with
respect to requests by international human rights mandates as deeply
regrettable.
The High Commissioner also cited Belarus, Eritrea, Democratic Republic
of Korea, Islamic Republic of Iran and Syria as examples of non-cooperation
with country specific mandates of the Special Procedures; he expressed concern
on the condition of human rights defenders in Bahrain and he has stressed the
need to ensure guarantees given by a due process for the people of Philippines
and an impartial and wide-ranging inquiry by an international independent body
on extrajudicial killings.
Regarding the Philippines Ms. Cecilia B. Rebong has explained that the
situation in the country has been exacerbated by a pandemic situation on drugs problem for youth and
society, correlated with criminality. She added that the situation needs to be
addressed with tenacity, but she denied that the President of the Philippines
empowered police forces to shoot to kill any individual whom they suspect of drug
crimes.
The speech concluded with the hope for the Council to maintain
credibility and further develop consistent action by clearly upholding the
equal value of all human rights across all societies.