International day of the Child 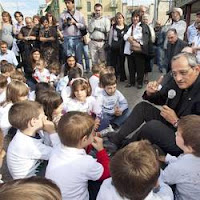 (ANS – Rome) – On the occasion
of the World Day for Prayer and Action for Children around the world the Rector
Major invites every Salesian community in the world to strengthen its
commitment to promoting and safeguarding the right of every child in the world
to be registered at birth.
My
dear brothers and sisters, Salesians, Salesian Sisters,  members of the Salesian
Family, young people involved in volunteer movements.

On
20 November Universal Childrens Day will be celebrated, commemorating the 1989
adoption of the United Nations Convention on the Rights of the Child. Since 2009, the 20th of November has also been an opportunity for
celebrating the World Day of Prayer and action for Children.

In
both 2010 and 2011, I sent you a message asking you to support this grand
inter-religious initiative promoted by the Global Network of Religions for
Children (GNRC) with the support of Arigatou International, stating that only
if religious leaders and all of us know how to unite forces can we give
adequate response to the dramatic and massive violence done to the dignity and
fundamental rights of children around the world.
This year, for the 20th November, I would like to launch an appeal for prayer and action “For the universal promotion of the right of registration at birth as a tool in the struggle against poverty and prevention of violence against children: There should be no more ‘non-existent’ children”.
There are an estimated 50 million children in the world whose existence is not recognized because they have never been registered anywhere. They have no document stating their name, no indication of nationality or age. The consequences of such an omission are truly serious: exclusion from school, lack of health care, trafficking of minors, exploitation of child labor  under-age marriage and forced enlistment. An individual’s birth certificate allows one to become a citizen, and guarantees that basic rights will be protected and respected. Without a birth certificate an adult may never legally obtain a passport, travel, get married, gain access to education or welfare, acquire property, inheritance, or take up formal work.
As we journey towards the Bicentenary of the birth of our Saint we, the Salesian Family, need to follow firmly in Don Bosco’s footsteps as the father and teacher of the young.
The Salesian Family has a wonderful legacy in its grasp: 15 million boys and girls in 133 countries around the world. We recognize this with humility but also with awareness. Like Don Bosco in his time, we must be active on behalf of their salvation.
It is my hope that Salesian communities will be foster strong alliances with other men and women of faith and be a powerful force in creation for a new culture of promotion and protection of human rights “without discrimination of any kind, irrespective of the child’s or his or her parent’s or legal guardian’s race, color, sex, language, religion, political or other opinion, national, ethnic or social origin, property, disability, birth or other status (art.2, UN Convention on the rights of the child).
Fr Pascual Chávez V.
Rector Major
Source: http://www.infoans.org/1.asp?sez=1&sotSez=&doc=8558&Lingua=1