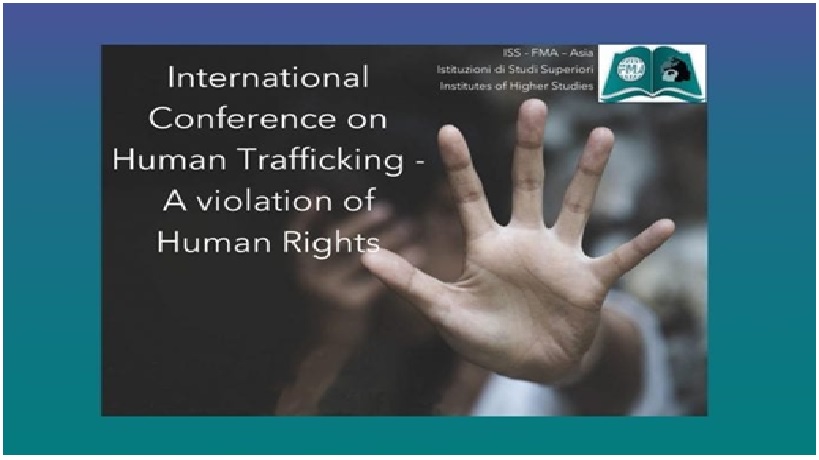 International Conference on “Human Trafficking – A violation of Human Rights”

On December 12, 2020, the network of the nine Institutions of Higher Studies of the Istituto Internazionale Maria Ausiliatrice (ISS-FMA) Asia organized an online Conference on “Human Trafficking – A violation of Human Rights”. There were approximately 800 participants, mainly students and some faculty members coming from India, the Philippines, and Japan. The event, which marked the observance of Human Rights Day, aimed to raise awareness on one of the most extensive forms of modern slavery, that is, Trafficking in Person (T.I.P.).

Dr. Regina Mary Rathinaswamy,  Core Group Member of ISS – FMA Asia, presented the identity, mission, and vision of ISS-FMA Asia and its role in educating young people to be responsible builders of fraternal humanity and in protecting the environment by working to achieve the UN sustainable development goals.

Maria Nirmala Lazar, Director of IIMA India Madras, in her opening remarks emphasized the need to address the issue of human trafficking – “the common enemy”. She reiterated Pope Francis’ message that it is the responsibility of every human being to respect and protect the dignity of every human life for it is the most important requirement for a country’s economic and social development.

The first technical session speaker, Mary J. Isabella Antony Raj, Head of INM-VTC, spoke of the relationship between Human Rights and Human Trafficking. She elaborated on the causes of T.I.P. and its forms such as bonded labor, illegal businesses, sex trade, abduction, and organ removal with the children, unemployed youth, migrant workers, and refugees as the most vulnerable victims of human trafficking. All this can be changed, explained sr. Mary J. Isabella, only by the joined efforts of legislative bodies, enforcement bodies, programs for victims of T.I.P., training and capacity building programs for the unemployed, awareness programs, and the empowerment of the vulnerable population.

During the second technical session, Sarah B. Garcia, IIMA Main Representative to the UN, Geneva, underscored the theme: “Empowering and Empowered Youth: A Global Agenda”. She gave an account of the crime of human trafficking pointing out that the solution to such a problem is to champion human rights, by creating a Universal Culture of Human Rights through Human Rights Education especially for children and young people. The first step to it as highlighted by Pope Francis is “to educate to a new thought that can reconcile identity and otherness, unity and diversity, equality and freedom” (Global Compact on Education, Instrumentum Laboris, p.11). In fact, it is IIMA’s commitment to promoting the empowerment of children, youth, and women, and their right to participation in decision-making and in building a humanism of justice and peace through integral education and human rights education.