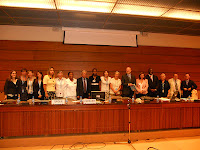 The
contribution of these distinguished speakers was invaluable, as was their emphasis
on the need to invest in quality education as the foundation of all human
rights and sustainable development. Each hailed the side event as a great
success.