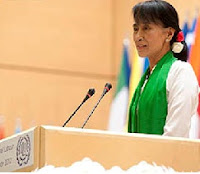 On the 14th
of June, the 101st Conference of the International Labour Organization (ILO) was
visited by the Burmese opposition leader, Aung San Suu Kyi, General Secretary
of the National League for democracy (NLD) and, since April 2012, Member of the
Parliament of Republic of Union of Myanmar. Ms. Suu Kyi was visiting Europe for
the first time in 24 years, most of which had been spent under house arrest since
the Burmese military regime – still governing –  condemned her.
During the ILO Conference Ms.
Suu Kyi addressed the issue of youth
employment in Myanmar, drawing attention to poor and inadequate education, emphasizing
the lack of vocational training as a main cause of youth unemployment. The
Burmese leader called for reforms in the education system and for job creation as
a mechanism to attract foreign investment. Direct foreign investment would also
strengthen the democratization process started in the Republic of the Union of
Myanmar.  Ms. Suu Kyi aspires to
sustainable and democracy-friendly development that all Burmese people can benefit
from.
Ms.Suu Kyi also raised the
issue of Burmese migrant workers who
live and work in Thailand whose rights are frequently violated. She launched an
appeal to both the Burmese and Thai governments to protect migrant workers.