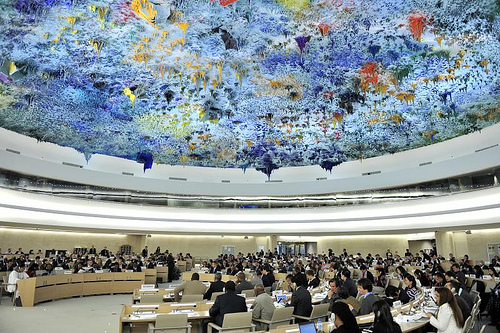 Annual Discussion on Gender Integration at the HRC

On the 26th of September 2016, the United Nations in Geneva held the annual discussion on the integration of a gender perspective throughout the work of the Human Rights Council and that of its mechanisms, focusing specifically on the theme: gender integration in the resolutions and recommendations of the Human Rights Council.  The panel was chaired by H.E. Mr. Choi Kyong-lim, President of the Human Rights Council. The opening statement was delivered by Ms. Kate Gilmore, United Nations Deputy High Commissioner for Human Rights. Ms. Gilmore painted a solemn picture of the status of gender equality in our world, emphasizing that true equality is not about men or women, boys or girls, but rather about human beings. She called for the need for the discussions about gender equality to move away from UN documents and into practice in country resolutions. Furthermore, she emphasized the importance of including the innovative approaches of young people in order to achieve this goal of gender parity. After commending Ms. Gilmore for her powerful words, the moderator of the panel, Ms. Rama Mani, Senior Research Associate at University of Oxford Centre for International Studies and Co-Founder of Rising Women Rising World, took the floor. Before introducing the panelists, Ms. Mani emphasized the importance of including civil societies in discussions about gender, as well as the need to strengthen the idea of women and girls as agents, rather than objects or victims.

The first panelist was H.E. Mr. Boudjemâa Delmi, Ambassador and Permanent Representative of Algeria to the United Nations Office at Geneva. Mr. Delmi presented on the advances made in Algeria to mainstream gender, focusing on his country’s success in championing women’s right to nationality, formerly denied because of religious and social constraints.

The next panelist was Ms. Christine Brautigam, the Director of the Intergovernmental Support Division of UN Women (United Nations Entity for Gender Equality and the Empowerment of Women). Ms. Brautigam lauded the improvements in incorporating gender perspectives in UN Systems; however she also shared that there were still various topics where a gender lens was lacking, for example, in the areas of criminal justice and narcotic drugs.
The next panelist was Mr. Juan Ernesto Méndez, Special Rapporteur on torture and other cruel, inhuman or degrading treatment or punishment. Mr. Méndez’s comments illustrated that the situation for women and girls was indeed grim when their interests are not taken into account in every facet of life. He presented heart-wrenching facts: women’s needs and protections go unnoticed in prisons as these centres were made for male rather than female realities; also 80% of women in prison are mothers and primary caregivers. The final panelist was Ms. Aoife Hegarty, the Programme Manager at UPR Info. She highlighted the importance of disaggregating data based on gender, as well as stopping the practice of grouping women and girls together in the same category, as each group has a different experience. She also called for a broadening of the definition of gender in the UPR.

In the State and NGO interventions, Cuba, Libya, Venezuela, Australia and the Global Initiative for Economic, Social and Cultural Rights and many others expressed their disappointment with the fact that the United Nations and the HRC did not possess the gender parity that it supposedly championed. Pakistan added to this by stating that there must not only be equal representation at the UN, but also equal geographical representation of women. Sweden wanted to see more female Special Rapporteurs and Independent Experts. Qatar lamented at the waste of human potential when women and girls are marginalized, also emphasizing the need to adopt country and culture specific approaches to incorporating women into the decision making process. UN Watch proceeded to call out Qatar as one of the countries where women are arrested for being victims of rape, reaffirming that women’s rights are human rights. The UK and Palau celebrated their efforts to empower women; however the UK lamented that women still only made up 44% of public appointments and Palau, being a matrilineal society, realized that it needs to increase its efforts to give special attention to men and boys. Russia welcomed this panel discussion, but also warned against distortions of this gender topic, as these distortions detract attention from other important problems. The World Young Women’s Christian Association called for the need for countries to focus on broader women’s issues instead of merely on gender based violence.

In the responses and concluding remarks, Mr. Delmi encouraged the creation of more UN resolutions focused on the issues of women and girls, a strategy which he believes to be useful to keep this issue updated and relevant. Ms. Brautigam encouraged countries to provide detailed reporting and strive to reach gender parity by 2020, rather than by the SDG goal of 2030. Mr. Méndez emphasized the importance of always having a person that can provide an expert gender perspective. Ms. Hegarty echoed the words of her fellow panelists throughout the event when she emphasized the importance of working with NGOs in order to understand the full extent of the gender issues affecting each nation. Ms. Mani brought the discussion to a close with the words, “it takes a village to raise a child, [but] it takes all of the UN to work together to fulfil this point of gender integration.”
After thanking the panelists and participants, H.E. Mr. Choi declared the end of the annual discussion.