Affirming the role of youth as promoters of human rights, development and peace 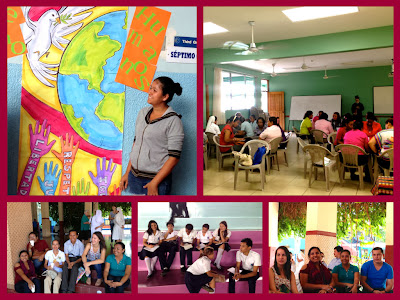 From October 7th to 16th,
2013, the IIMA Human Rights Office staff organized several seminars and
workshops in Panama, Nicaragua and Costa Rica to raise awareness on the
importance of adopting a human-rights based prospective and bring local civil
society’s concerns to the international level.
This visit to Central America aimed at
enhancing local awareness and participation in the monitoring and advocacy
process within the Universal Periodic Review (UPR) of the three countries. More
than that, the visit specifically focused on the situation of youth in those
countries: the participants included Salesian Sisters, young people and other educators
working with youth. The seminars offered an introduction to the UN mechanisms promoting
and protecting human rights, especially the UPR. Special attention was paid to
the role of Civil Society and modalities to contribute in the work of the UN. The
workshops emphasized youth empowerment and active citizenship.
Why youth?
At IIMA Human Rights Office, we believe that the global situation of
youth deserves a special attention now. The Arab Spring with its local and
global repercussions showed how the impetus of young people has extraordinary
force and potential. Yet, if not adequately promoted and valued, there is a
potential risk of imploding, instead of bringing a positive change in the lives
of youth and in society-at-large. Subsequent episodes of violence and disorder
in several regions of the world (e.g. Spain and Brazil) have proved that this
phenomenon is not an isolated one.
The widespread emergency situation created and experienced by youth
worldwide is clearly recognized by the United Nations. As stated by the UN
Secretary General, “The world is on the cusp of an unprecedented demographic
phenomenon.” With over 1.5 billion young people, the world holds today a large
generation of creativity, idealism and talent. While young people can drive
change and progress, this group is also facing enormous challenges. Accordingly,
in 2012, Ban Ki Moon made youth one of the UN’s priorities calling, inter alia, for the development of a
System-wide Action Plan on Youth (Youth-SWAP), which provides strategic
guidance to the UN system focusing on the several thematic areas, including
employment and education.
Also due to the youth employment crisis, lack of motivation and frustration
among youth is becoming more and more widespread worldwide. This is sometimes expressed
through demonstrations and episodes of violence. Nevertheless, at a closer
look, we might notice that unemployment and lack of services in general are
only part of the problem. The true source of this economic and “human” crisis can
be found in the generalized lack of trust among youth towards their governments
and institutions. Youth feel deprived of their fundamental rights and excluded
from decision-making processes. These factors, in turn, have a strong impact on
their lives and the society at large. The full recognition of youth’s rights
is, in fact, necessary to adequately prepare them to assume their responsibility
in the society.
What’s next?
The IIMA Human Rights office is working to bring the attention of the
Human Rights Council (HRC) to youth empowerment and possibly negotiate a
youth-related HRC resolution.
Following the previous event held on June 4, 2013, a side event will
take place during the 25th HRC session (in March 2014) to pave the
way towards this goal. On this occasion, youth will present their experience
describing their contributions to promote human rights as well as social and
economic development in their own countries.
While continuous efforts are realized to ensure human rights for many
vulnerable groups, youth are often forgotten in human rights-based policies and
interventions despite the fact that young people represent the most important
resource and driving force for every country. Thus, there is an urgent need to
reverse this trend now. As highlighted in ILO resolution 2012, “Youth are part
of the solution. Their voices should be heard, their creativity engaged, and
their rights respected….” The implementation of human rights, for and through
youth, is the key to unlock the potential of young people as promoters and
builders of a society living in peace and solidarity.